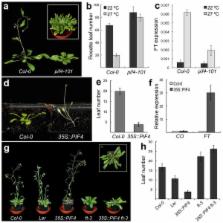 Alastair H Fitter,  R Fitter (2002)
The average first flowering date of 385 British plant species has advanced by 4.5 days during the past decade compared with the previous four decades: 16% of species flowered significantly earlier in the 1990s than previously, with an average advancement of 15 days in a decade. Ten species (3%) flowered significantly later in the 1990s than previously. These data reveal the strongest biological signal yet of climatic change. Flowering is especially sensitive to the temperature in the previous month, and spring-flowering species are most responsive. However, large interspecific differences in this response will affect both the structure of plant communities and gene flow between species as climate warms. Annuals are more likely to flower early than congeneric perennials, and insect-pollinated species more than wind-pollinated ones.

D Battisti,  Kierstin Naylor (2009)
Higher growing season temperatures can have dramatic impacts on agricultural productivity, farm incomes, and food security. We used observational data and output from 23 global climate models to show a high probability (>90%) that growing season temperatures in the tropics and subtropics by the end of the 21st century will exceed the most extreme seasonal temperatures recorded from 1900 to 2006. In temperate regions, the hottest seasons on record will represent the future norm in many locations. We used historical examples to illustrate the magnitude of damage to food systems caused by extreme seasonal heat and show that these short-run events could become long-term trends without sufficient investments in adaptation.

Dean Ravenscroft,  Alon Samach,  Federico Valverde … (2004)
Many plants flower in response to seasonal fluctuations in day length. The CONSTANS (CO) gene of Arabidopsis promotes flowering in long days. Flowering is induced when CO messenger RNA expression coincides with the exposure of plants to light. However, how this promotes CO activity is unknown. We show that light stabilizes nuclear CO protein in the evening, whereas in the morning or in darkness the protein is degraded by the proteasome. Photoreceptors regulate CO stability and act antagonistically to generate daily rhythms in CO abundance. This layer of regulation refines the circadian rhythm in CO messenger RNA and is central to the mechanism by which day length controls flowering.

SVK, DL, KEJ, EA performed the experiments. NPH and PAW designed the study and supervised the work. All authors discussed the results and made substantial contributions to the manuscript.