Monoclonal gammopathy of renal significance (MGRS) increases the risk for progression to multiple myeloma: an observational study of 2935 MGUS patients 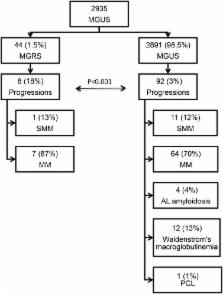 Monoclonal gammopathy of undetermined significance (MGUS) is a premalignancy preceding multiple myeloma (MM) or related disorders. In MGUS, renal impairment caused by deposition of the monoclonal immunoglobulins or free light-chains monoclonal gammopathy of renal significance (MGRS) is often associated with high morbidity and mortality. We analysed the prevalence of renal impairment, clinical features and the long-term outcome in 2935 patients with MGUS.

The significantly higher risk for progression to MM means MGRS patients should be monitored carefully and treated in a specialized centre.

Angela Dispenzieri,  S Rajkumar,  J Offord … (2006)
The prevalence of monoclonal gammopathy of undetermined significance (MGUS), a premalignant plasma-cell disorder, among persons 50 years of age or older has not been accurately determined. We used sensitive laboratory techniques to ascertain the prevalence of MGUS in a large population in a well-defined geographic area. We identified all living residents of Olmsted County, Minnesota, as of January 1, 1995. We obtained serum that remained after the performance of routine clinical tests at Mayo Clinic or asked subjects for whom such serum was unavailable to provide a sample. Agarose-gel electrophoresis was performed on all serum samples, and any serum sample with a discrete band of monoclonal protein or thought to have a localized band was subjected to immunofixation. Serum samples were obtained from 21,463 of the 28,038 enumerated residents 50 years of age or older (76.6 percent). MGUS was identified in 694 (3.2 percent) of these persons. Age-adjusted rates were higher in men than in women (4.0 percent vs. 2.7 percent, P<0.001). The prevalence of MGUS was 5.3 percent among persons 70 years of age or older and 7.5 percent among those 85 years of age or older. The concentration of monoclonal immunoglobulin was less than 1.0 g per deciliter in 63.5 percent and at least 2.0 g per deciliter in only 4.5 percent of 694 persons. The concentration of uninvolved immunoglobulins was reduced in 27.7 percent of 447 persons tested, and 21.5 percent of 79 tested had a monoclonal urinary light chain. Among residents of Olmsted County, Minnesota, MGUS was found in 3.2 percent of persons 50 years of age or older and 5.3 percent of persons 70 years of age or older. Copyright 2006 Massachusetts Medical Society.

H. Einsele,  Shan Chen,  Joan Bladé … (2010)
Monoclonal gammopathy of undetermined significance (MGUS) was identified in 3.2% of 21 463 residents of Olmsted County, Minnesota, 50 years of age or older. The risk of progression to multiple myeloma, Waldenstrom's macroglobulinemia, AL amyloidosis or a lymphoproliferative disorder is approximately 1% per year. Low-risk MGUS is characterized by having an M protein <15 g/l, IgG type and a normal free light chain (FLC) ratio. Patients should be followed with serum protein electrophoresis at six months and, if stable, can be followed every 2-3 years or when symptoms suggestive of a plasma cell malignancy arise. Patients with intermediate and high-risk MGUS should be followed in 6 months and then annually for life. The risk of smoldering (asymptomatic) multiple myeloma (SMM) progressing to multiple myeloma or a related disorder is 10% per year for the first 5 years, 3% per year for the next 5 years and 1-2% per year for the next 10 years. Testing should be done 2-3 months after the initial recognition of SMM. If the results are stable, the patient should be followed every 4-6 months for 1 year and, if stable, every 6-12 months.

Monoclonal gammopathy of renal significance: when MGUS is no longer undetermined or insignificant.