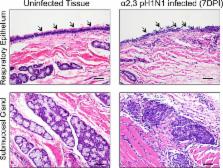 Kyoko Shinya, Masahito Ebina, Shinya Yamada … (2006)
Although more than 100 people have been infected by H5N1 influenza A viruses, human-to-human transmission is rare. What are the molecular barriers limiting human-to-human transmission? Here we demonstrate an anatomical difference in the distribution in the human airway of the different binding molecules preferred by the avian and human influenza viruses. The respective molecules are sialic acid linked to galactose by an alpha-2,3 linkage (SAalpha2,3Gal) and by an alpha-2,6 linkage (SAalpha2,6Gal). Our findings may provide a rational explanation for why H5N1 viruses at present rarely infect and spread between humans although they can replicate efficiently in the lungs.

Kensuke Nakamura, Taku Oshima, Takuya Morimoto … (2011)
We identified the sequence-specific starting positions of consecutive miscalls in the mapping of reads obtained from the Illumina Genome Analyser (GA). Detailed analysis of the miscall pattern indicated that the underlying mechanism involves sequence-specific interference of the base elongation process during sequencing. The two major sequence patterns that trigger this sequence-specific error (SSE) are: (i) inverted repeats and (ii) GGC sequences. We speculate that these sequences favor dephasing by inhibiting single-base elongation, by: (i) folding single-stranded DNA and (ii) altering enzyme preference. This phenomenon is a major cause of sequence coverage variability and of the unfavorable bias observed for population-targeted methods such as RNA-seq and ChIP-seq. Moreover, SSE is a potential cause of false single-nucleotide polymorphism (SNP) calls and also significantly hinders de novo assembly. This article highlights the importance of recognizing SSE and its underlying mechanisms in the hope of enhancing the potential usefulness of the Illumina sequencers.

Debby van Riel, Vincent Munster, Emmie de Wit … (2006)
Highly pathogenic avian influenza virus (H5N1) may cause severe lower respiratory tract (LRT) disease in humans. However, the LRT cells to which the virus attaches are unknown for both humans and other mammals. We show here that H5N1 virus attached predominantly to type II pneumocytes, alveolar macrophages, and nonciliated bronchiolar cells in the human LRT, and this pattern was most closely mirrored in cat and ferret tissues. These findings may explain, at least in part, the localization and severity of H5N1 viral pneumonia in humans. They also identify the cat and the ferret as suitable experimental animals based on this criterion.

Reprints and permissions information is available at www.nature.com/nature