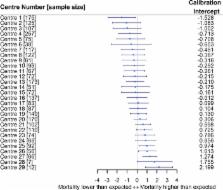 Existing clinical prediction models (CPM) for short-term mortality after transcatheter aortic valve implantation (TAVI) have limited applicability in the UK due to moderate predictive performance and inconsistent recording practices across registries. The aim of this study was to derive a UK-TAVI CPM to predict 30-day mortality risk for benchmarking purposes.

A two-step modelling strategy was undertaken: first, data from the UK-TAVI Registry between 2009 and 2014 were used to develop a multivariable logistic regression CPM using backwards stepwise regression. Second, model-updating techniques were applied using the 2013–2014 data, thereby leveraging new approaches to include frailty and to ensure the model was reflective of contemporary practice. Internal validation was performed by bootstrapping to estimate in-sample optimism-corrected performance.

The UK-TAVI CPM demonstrated strong calibration and moderate discrimination in UK-TAVI patients. This model shows potential for benchmarking, but even the inclusion of frailty did not overcome the need for more wide-ranging data and other outcomes might usefully be explored.

Development and validation of a prediction model with missing predictor data: a practical approach.

Yvonne Vergouwe,  Patrick Royston,  Karel Moons … (2010)
To illustrate the sequence of steps needed to develop and validate a clinical prediction model, when missing predictor values have been multiply imputed. We used data from consecutive primary care patients suspected of deep venous thrombosis (DVT) to develop and validate a diagnostic model for the presence of DVT. Missing values were imputed 10 times with the MICE conditional imputation method. After the selection of predictors and transformations for continuous predictors according to three different methods, we estimated regression coefficients and performance measures. The three methods to select predictors and transformations of continuous predictors showed similar results. Rubin's rules could easily be applied to estimate regression coefficients and performance measures, once predictors and transformations were selected. We provide a practical approach for model development and validation with multiply imputed data. Copyright 2010 Elsevier Inc. All rights reserved.

Peter C Austin,  Ewout W. Steyerberg (2014)
We conducted an extensive set of empirical analyses to examine the effect of the number of events per variable (EPV) on the relative performance of three different methods for assessing the predictive accuracy of a logistic regression model: apparent performance in the analysis sample, split-sample validation, and optimism correction using bootstrap methods. Using a single dataset of patients hospitalized with heart failure, we compared the estimates of discriminatory performance from these methods to those for a very large independent validation sample arising from the same population. As anticipated, the apparent performance was optimistically biased, with the degree of optimism diminishing as the number of events per variable increased. Differences between the bootstrap-corrected approach and the use of an independent validation sample were minimal once the number of events per variable was at least 20. Split-sample assessment resulted in too pessimistic and highly uncertain estimates of model performance. Apparent performance estimates had lower mean squared error compared to split-sample estimates, but the lowest mean squared error was obtained by bootstrap-corrected optimism estimates. For bias, variance, and mean squared error of the performance estimates, the penalty incurred by using split-sample validation was equivalent to reducing the sample size by a proportion equivalent to the proportion of the sample that was withheld for model validation. In conclusion, split-sample validation is inefficient and apparent performance is too optimistic for internal validation of regression-based prediction models. Modern validation methods, such as bootstrap-based optimism correction, are preferable. While these findings may be unsurprising to many statisticians, the results of the current study reinforce what should be considered good statistical practice in the development and validation of clinical prediction models.

Impact of the Clinical Frailty Scale on Outcomes After Transcatheter Aortic Valve Replacement.

Tetsuro Shimura,  Masanori Yamamoto,  Seiji Kano … (2017)
The semiquantitative Clinical Frailty Scale (CFS) is a simple tool to assess patients' frailty and has been shown to correlate with mortality in elderly patients even when evaluated by nongeriatricians. The aim of the current study was to determine the prognostic value of CFS in patients who underwent transcatheter aortic valve replacement.