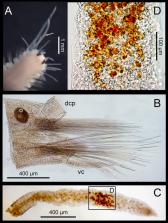 To date, the genus Amphiduros ( Annelida : Hesionidae : Amphidurine) is considered as monotypic. Its single species, Amphiduros fuscescens (Marenzeller, 1875), is well characterised by lacking proboscideal papillae and emerging acicular chaetae, as well as by having three antennae, eight pairs of tentacular cirri and inflated dorsal cirri with characteristic alternating length and colour (transparent, with median orange band and white tips) in live animals.

Three specimens, one male and two females, were found below boulders at 5–7 m depth in Punta Santa Anna, Blanes and Cala Maset, Sant Feliu de Guixols (Catalan Sea, NW Mediterranean, Iberian Peninsula). Our finding allowed us to describe different, unreported morphological traits and lead us to support the existence of sexual dimorphism (in terms of colouring, cirri morphology and distribution of sexual products along the body). Despite A. fuscescens having been previously reported from the Atlantic and the Mediterranean (particularly in SE French coasts), the specimens from Blanes represent the first record of the species from the Iberian Peninsula. In addition, our molecular results strongly support that Amphiduros pacificus Hartman, 1961 from California (currently synonymised with A. fuscescens ) requires to be re-described and reinstalled as a valid species. In turn, our morphological observations support suggesting all other non-Mediterranean reports of A. fuscescens , including the species still under synonymy (i.e. Amphidrornus izukai Hessle, 1925 and Amphidromus setosus Hessle, 1925) as likely being a cryptic species complex whose the taxonomic status requires further assessment.

Geneious Basic: An integrated and extendable desktop software platform for the organization and analysis of sequence data

Matthew Kearse,  Richard Moir,  Amy Wilson … (2012)
Summary: The two main functions of bioinformatics are the organization and analysis of biological data using computational resources. Geneious Basic has been designed to be an easy-to-use and flexible desktop software application framework for the organization and analysis of biological data, with a focus on molecular sequences and related data types. It integrates numerous industry-standard discovery analysis tools, with interactive visualizations to generate publication-ready images. One key contribution to researchers in the life sciences is the Geneious public application programming interface (API) that affords the ability to leverage the existing framework of the Geneious Basic software platform for virtually unlimited extension and customization. The result is an increase in the speed and quality of development of computation tools for the life sciences, due to the functionality and graphical user interface available to the developer through the public API. Geneious Basic represents an ideal platform for the bioinformatics community to leverage existing components and to integrate their own specific requirements for the discovery, analysis and visualization of biological data. Availability and implementation: Binaries and public API freely available for download at http://www.geneious.com/basic, implemented in Java and supported on Linux, Apple OSX and MS Windows. The software is also available from the Bio-Linux package repository at http://nebc.nerc.ac.uk/news/geneiousonbl. Contact: peter@biomatters.com