Development and identification of fully human scFv-Fcs against Staphylococcus aureus 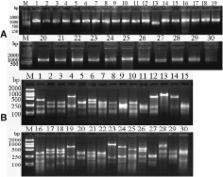 Staphylococcus aureus, a gram-positive pathogen, causes many human infections. Methicillin-resistant S. aureus (MRSA) is the most common drug-resistance bacteria. Nearly all MRSA bacteria are resistant to several drugs. Specific antibodies are the main components of the host’s humoral immunity, and play a significant role in the process of the host’s resistance to bacterial infection.

A single-chain variable fragment (scFv) library was constructed using mRNA from the peripheral blood mononuclear cells of S. aureus infected volunteers. After the scFv library DNA was transformed into Escherichia coli TG1, ~1.7 × 10 7 independent clones with full-length scFv inserts. The scFv library was screened by phage display for three rounds using S. aureus as an antigen. The single clones were chosen at random and the scFvs were expressed for enzyme-linked immunosorbent assay (ELISA) assessment. Approximately 50 % of the clones were positive with good binding activity to S. aureus. To improve the stability of scFvs, scFv-fragment crystallizable regions (-Fcs) were constructed and expressed in E. coli DH5α. The expressed scFv-Fcs were purified and identified by western blot. These antibodies were further characterized and analyzed for bioactivity. The results showed that the expression level and folding of scFv-Fcs induced at 25 °C without isopropyl β-D-1-thiogalactopyranoside (IPTG) were higher than that induced at 32 °C with 1.0 mmol/L IPTG. scFv-Fcs had good bioactivity and could specifically bind with S. aureus.

scFv-Fcs against S. aureus were successfully constructed and are good candidates for the development of future adjunctive therapy for severe S. aureus infections.

F William Studier (2005)
Inducible expression systems in which T7 RNA polymerase transcribes coding sequences cloned under control of a T7lac promoter efficiently produce a wide variety of proteins in Escherichia coli. Investigation of factors that affect stability, growth, and induction of T7 expression strains in shaking vessels led to the recognition that sporadic, unintended induction of expression in complex media, previously reported by others, is almost certainly caused by small amounts of lactose. Glucose prevents induction by lactose by well-studied mechanisms. Amino acids also inhibit induction by lactose during log-phase growth, and high rates of aeration inhibit induction at low lactose concentrations. These observations, and metabolic balancing of pH, allowed development of reliable non-inducing and auto-inducing media in which batch cultures grow to high densities. Expression strains grown to saturation in non-inducing media retain plasmid and remain fully viable for weeks in the refrigerator, making it easy to prepare many freezer stocks in parallel and use working stocks for an extended period. Auto-induction allows efficient screening of many clones in parallel for expression and solubility, as cultures have only to be inoculated and grown to saturation, and yields of target protein are typically several-fold higher than obtained by conventional IPTG induction. Auto-inducing media have been developed for labeling proteins with selenomethionine, 15N or 13C, and for production of target proteins by arabinose induction of T7 RNA polymerase from the pBAD promoter in BL21-AI. Selenomethionine labeling was equally efficient in the commonly used methionine auxotroph B834(DE3) (found to be metE) or the prototroph BL21(DE3).

Ole Aalund Mandrup,  Niels Anton Friis,  Simon Lykkemark … (2013)
Today a number of synthetic antibody libraries of different formats have been created and used for the selection of a large number of recombinant antibodies. One of the determining factors for successful isolation of recombinant antibodies from libraries lies in the quality of the libraries i.e. the number of correctly folded, functional antibodies contained in the library. Here, we describe the construction of a novel, high quality, synthetic single domain antibody library dubbed Predator. The library is based on the HEL4 domain antibody with the addition of recently reported mutations concerning the amino acid composition at positions critical for the folding characteristics and aggregation propensities of domain antibodies. As a unique feature, the CDR3 of the library was designed to mimic the natural human immune response by designating amino acids known to be prevalent in functional antibodies to the diversity in CDR3. CDR randomizations were performed using trinucleotide synthesis to avoid the presence of stop codons. Furthermore a novel cycle free elongation method was used for the conversion of the synthesized single stranded DNA containing the randomized CDRs into double stranded DNA of the library. In addition a modular approach has been adopted for the scaffold in which each CDR region is flanked by unique restrictions sites, allowing easy affinity maturation of selected clones by CDR shuffling. To validate the quality of the library, one round phage display selections were performed on purified antigens and highly complex antigen mixtures such as cultured eukaryotic cells resulting in several specific binders. The further characterization of some of the selected clones, however, indicates a reduction in thermodynamic stability caused by the inclusion the additional mutations to the HEL4 scaffold.

Patrick M. Schlievert,  Wilmara Salgado-Pabon,  Skylar Cook (2013)
Staphylococcal superantigens (SAgs) comprise a large family of exotoxins produced by Staphylococcus aureus strains. These exotoxins are important in a variety of serious human diseases, including menstrual and nonmenstrual toxic shock syndrome (TSS), staphylococcal pneumonia and infective endocarditis, and recently described staphylococcal purpura fulminans and extreme pyrexia syndrome. In addition, these SAg exotoxins are being increasingly recognized for their possible roles in many other human diseases, such as atopic dermatitis, Kawasaki syndrome, nasal polyposis, and certain autoimmune disorders. To clarify the full spectrum of human diseases caused by staphylococcal SAgs, it is necessary to have assays for them. At present there are 23 characterized, serologically distinct SAgs made by S. aureus: TSS toxin-1(TSST-1); staphylococcal enterotoxins (SEs) A, B (multiple variant forms exist), C (multiple minor variant forms exist), D, E, and G; and SE-like H, I, J, K, L, M, N, O, P, Q, R, S, T, U, V, and X. The most straightforward way to analyze S. aureus strains for SAgs is through polymerase chain reaction for their genes; we provide here our method for this analysis. Although it would be ideal to confirm that all of the same SAgs are produced by S. aureus strains that have the genes, antibody reagents for SAg detection are only available for TSST-1; SEs A-E and G; and enterotoxin-like proteins H, I, Q, and X. We provide a Western immunoblot procedure that allows in vitro quantification of these SAgs.