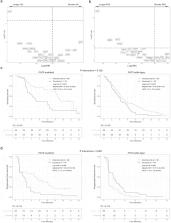 Somatic mutations of STK11 or KEAP1 are associated with poor clinical outcomes for advanced non-small-cell lung cancer (aNSCLC) patients receiving immune checkpoint inhibitors (ICIs), chemotherapy, or targeted therapy. Which treatment regimens work better for STK11 or KEAP1 mutated (SKmut) aNSCLC patients is unknown. In this study, the efficacy of atezolizumab versus docetaxel in SKmut aNSCLC was compared. A total of 157 SKmut aNSCLC patients were identified from POPLAR and OAK trials, who were tested by blood-based FoundationOne next-generation sequencing assay. Detailed clinical data and genetic alterations were collected. Two independent cohorts were used for biomarker validation (n = 30 and 20, respectively). Median overall survival was 7.3 months (95% confidence interval [CI], 4.8 to 9.9) in the atezolizumab group versus 5.8 months (95% CI, 4.4 to 7.2) in the docetaxel group (adjusted hazard ratio [HR] for death, 0.70; 95% CI, 0.49 to 0.99; P = .042). Among atezolizumab-treated patients, objective response rate, disease control rate, and durable clinical benefit were higher when blood tumor mutation burden (bTMB) and PD-L1 being higher (biomarker 1, n = 61) or with FAT3 mutation-positive tumors (biomarker 2, n = 83) than otherwise. The interactions for survival between these two biomarkers and treatments were significant, which were further validated in two independent cohorts. In SKmut patients with aNSCLC, atezolizumab was associated with significantly longer overall survival in comparison to docetaxel. Having FAT3 mutation or high TMB and PD-L1 expression potentially predict favorable response in SKmut patients receiving atezolizumab.

E.A. Eisenhauer,  P Therasse,  J. Bogaerts … (2009)
Assessment of the change in tumour burden is an important feature of the clinical evaluation of cancer therapeutics: both tumour shrinkage (objective response) and disease progression are useful endpoints in clinical trials. Since RECIST was published in 2000, many investigators, cooperative groups, industry and government authorities have adopted these criteria in the assessment of treatment outcomes. However, a number of questions and issues have arisen which have led to the development of a revised RECIST guideline (version 1.1). Evidence for changes, summarised in separate papers in this special issue, has come from assessment of a large data warehouse (>6500 patients), simulation studies and literature reviews. HIGHLIGHTS OF REVISED RECIST 1.1: Major changes include: Number of lesions to be assessed: based on evidence from numerous trial databases merged into a data warehouse for analysis purposes, the number of lesions required to assess tumour burden for response determination has been reduced from a maximum of 10 to a maximum of five total (and from five to two per organ, maximum). Assessment of pathological lymph nodes is now incorporated: nodes with a short axis of 15 mm are considered measurable and assessable as target lesions. The short axis measurement should be included in the sum of lesions in calculation of tumour response. Nodes that shrink to <10mm short axis are considered normal. Confirmation of response is required for trials with response primary endpoint but is no longer required in randomised studies since the control arm serves as appropriate means of interpretation of data. Disease progression is clarified in several aspects: in addition to the previous definition of progression in target disease of 20% increase in sum, a 5mm absolute increase is now required as well to guard against over calling PD when the total sum is very small. Furthermore, there is guidance offered on what constitutes 'unequivocal progression' of non-measurable/non-target disease, a source of confusion in the original RECIST guideline. Finally, a section on detection of new lesions, including the interpretation of FDG-PET scan assessment is included. Imaging guidance: the revised RECIST includes a new imaging appendix with updated recommendations on the optimal anatomical assessment of lesions. A key question considered by the RECIST Working Group in developing RECIST 1.1 was whether it was appropriate to move from anatomic unidimensional assessment of tumour burden to either volumetric anatomical assessment or to functional assessment with PET or MRI. It was concluded that, at present, there is not sufficient standardisation or evidence to abandon anatomical assessment of tumour burden. The only exception to this is in the use of FDG-PET imaging as an adjunct to determination of progression. As is detailed in the final paper in this special issue, the use of these promising newer approaches requires appropriate clinical validation studies.

The authors contributed equally to this work.