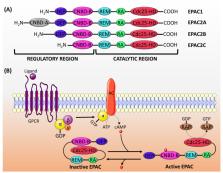 Vascular smooth muscle cells (VSMCs) are major components of blood vessels. They regulate physiological functions, such as vascular tone and blood flow. Under pathological conditions, VSMCs undergo a remodeling process known as phenotypic switching. During this process, VSMCs lose their contractility and acquire a synthetic phenotype, where they over-proliferate and migrate from the tunica media to the tunica interna, contributing to the occlusion of blood vessels. Since their discovery as effector proteins of cyclic adenosine 3′,5′-monophosphate (cAMP), exchange proteins activated by cAMP (EPACs) have been shown to play vital roles in a plethora of pathways in different cell systems. While extensive research to identify the role of EPAC in the vasculature has been conducted, much remains to be explored to resolve the reported discordance in EPAC’s effects. In this paper, we review the role of EPAC in VSMCs, namely its regulation of the vascular tone and phenotypic switching, with the likely involvement of reactive oxygen species (ROS) in the interplay between EPAC and its targets/effectors.

Ruth A. C. Foster (2000)
To facilitate a rapid response to environmental change, cells use scaffolding - or adaptor - proteins to recruit key components of their signal-transduction machinery to specific subcellular locations. Paxillin is a multi-domain adaptor found at the interface between the plasma membrane and the actin cytoskeleton. Here it provides a platform for the integration and processing of adhesion- and growth factor-related signals.