Rapid diversification associated with a macroevolutionary pulse of developmental plasticity 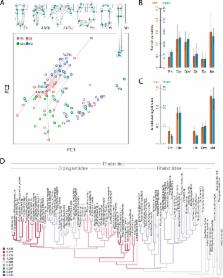 Developmental plasticity has been proposed to facilitate phenotypic diversification in plants and animals, but the macroevolutionary potential of plastic traits remains to be objectively tested. We studied the evolution of feeding structures in a group of 90 nematodes, including Caenorhabditis elegans, some species of which have evolved a mouthpart polyphenism, moveable teeth, and predatory feeding. Comparative analyses of shape and form, using geometric morphometrics, and of structural complexity revealed a rapid process of diversification associated with developmental plasticity. First, dimorphism was associated with a sharp increase in complexity and elevated evolutionary rates, represented by a radiation of feeding-forms with structural novelties. Second, the subsequent assimilation of a single phenotype coincided with a decrease in mouthpart complexity but an even stronger increase in evolutionary rates. Our results suggest that a macroevolutionary ‘pulse’ of plasticity promotes novelties and, even after the secondary fixation of phenotypes, permits sustained rapid exploration of morphospace.

Every animal and plant grows to a body plan that is defined by its genes. However, the body plan must be flexible enough to allow the organism to respond to whatever the world throws at it. This flexibility—known as developmental plasticity—allows an organism to change certain characteristics in order to survive in varying environmental conditions. For example, nerve cells in the brain need to be able to remodel to form memories.

It has been suggested that developmental plasticity can affect evolution because the ability to grow in different ways opens a diverse treasure trove of options from which to generate new forms and ways to exploit the environment. However, this potential had not previously been tested.

Susoy et al. looked at 90 species of roundworm that look different from one another, particularly in their mouths. Some of the worms have moveable teeth while others are simple and streamlined. Furthermore, of those examined, 23 species were found to be ‘dimorphic’ and have the ability to develop one of two types of mouth: either narrow or wide, depending on their prey.

Susoy et al. looked how similar the sequences of 14 genes were across all 90 species and used this information to build a family tree of how the roundworms are related to one another. Tracking which animals have dimorphic mouths on this tree produced an intriguing result: the strategy arose once in a single ancestor of the worms. Although this ability has been lost at least 10 times in the species that retained teeth, it has persisted in others through long periods of evolutionary time.

Next, Susoy et al. estimated the speed of evolution in these worms based on how quickly the characteristics of the worms' mouths had changed over evolutionary time. The gain of a dimorphic trait was associated with an increased rate of evolution and the appearance of many new species with diverse and more complex mouthparts. However, evolution was even faster where a dimorphism had been lost, even though the mouthparts generally became less complex.

Adaptation to an extraordinary environment by evolution of phenotypic plasticity and genetic assimilation.

Russell Lande (2009)
Adaptation to a sudden extreme change in environment, beyond the usual range of background environmental fluctuations, is analysed using a quantitative genetic model of phenotypic plasticity. Generations are discrete, with time lag tau between a critical period for environmental influence on individual development and natural selection on adult phenotypes. The optimum phenotype, and genotypic norms of reaction, are linear functions of the environment. Reaction norm elevation and slope (plasticity) vary among genotypes. Initially, in the average background environment, the character is canalized with minimum genetic and phenotypic variance, and no correlation between reaction norm elevation and slope. The optimal plasticity is proportional to the predictability of environmental fluctuations over time lag tau. During the first generation in the new environment the mean fitness suddenly drops and the mean phenotype jumps towards the new optimum phenotype by plasticity. Subsequent adaptation occurs in two phases. Rapid evolution of increased plasticity allows the mean phenotype to closely approach the new optimum. The new phenotype then undergoes slow genetic assimilation, with reduction in plasticity compensated by genetic evolution of reaction norm elevation in the original environment.

Liam Revell (2009)
Phylogenetic methods for the analysis of species data are widely used in evolutionary studies. However, preliminary data transformations and data reduction procedures (such as a size-correction and principal components analysis, PCA) are often performed without first correcting for nonindependence among the observations for species. In the present short comment and attached R and MATLAB code, I provide an overview of statistically correct procedures for phylogenetic size-correction and PCA. I also show that ignoring phylogeny in preliminary transformations can result in significantly elevated variance and type I error in our statistical estimators, even if subsequent analysis of the transformed data is performed using phylogenetic methods. This means that ignoring phylogeny during preliminary data transformations can possibly lead to spurious results in phylogenetic statistical analyses of species data.

John P. Huelsenbeck, Rasmus Nielsen, Jonathan Bollback (2003)
Many questions in evolutionary biology are best addressed by comparing traits in different species. Often such studies involve mapping characters on phylogenetic trees. Mapping characters on trees allows the nature, number, and timing of the transformations to be identified. The parsimony method is the only method available for mapping morphological characters on phylogenies. Although the parsimony method often makes reasonable reconstructions of the history of a character, it has a number of limitations. These limitations include the inability to consider more than a single change along a branch on a tree and the uncoupling of evolutionary time from amount of character change. We extended a method described by Nielsen (2002, Syst. Biol. 51:729-739) to the mapping of morphological characters under continuous-time Markov models and demonstrate here the utility of the method for mapping characters on trees and for identifying character correlation.

Funded by: FundRef http://dx.doi.org/10.13039/501100004189, Max-Planck-Gesellschaft (Max Planck Society);
Award Recipient : Ralf J Sommer
The funder had no role in study design, data collection and interpretation, or the decision to submit the work for publication.