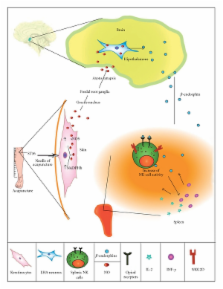 This article presents the hypothesis that acupuncture enhances anticancer immune functions by stimulating natural killer (NK) cells. It provides background information on acupuncture, summarizes the current scientific understanding of the mechanisms through which NK cells act to eliminate cancer cells, and reviews evidence that acupuncture is associated with increases in NK cell quantity and function in both animals and humans. The key contribution of this article involves the use of cellular immunology and molecular biological theory to interpret and synthesize evidence from disparate animal and human studies in formulating the ‘acupuncture immuno-enhancement hypothesis': clinicians may use acupuncture to promote the induction and secretion of NK-cell activating cytokines that engage specific NK cell receptors that endogenously enhance anticancer immune function.

Bruce Cook,  C D Mulrow,  R. Brian Haynes (1997)
Systematic reviews can help practitioners keep abreast of the medical literature by summarizing large bodies of evidence and helping to explain differences among studies on the same question. A systematic review involves the application of scientific strategies, in ways that limit bias, to the assembly, critical appraisal, and synthesis of all relevant studies that address a specific clinical question. A meta-analysis is a type of systematic review that uses statistical methods to combine and summarize the results of several primary studies. Because the review process itself (like any other type of research) is subject to bias, a useful review requires clear reporting of information obtained using rigorous methods. Used increasingly to inform medical decision making, plan future research agendas, and establish clinical policy, systematic reviews may strengthen the link between best research evidence and optimal health care.

A Cerwenka,  Lewis L Lanier (2001)
Natural killer cells are innate immune cells that control certain microbial infections and tumours. The function of natural killer cells is regulated by a balance between signals transmitted by activating receptors, which recognize ligands on tumours and virus-infected cells, and inhibitory receptors specific for major histocompatibility complex class I molecules. Here, we review the emerging evidence that natural killer cells have an important role in vivo in immune defence.

Massimo Vitale,  Cristina Bottino,  Simona Sivori … (1998)
After culture in interleukin (IL)-2, natural killer (NK) cells acquire an increased capability of mediating non–major histocompatibility complex (MHC)–restricted tumor cell lysis. This may reflect, at least in part, the de novo expression by NK cells of triggering receptors involved in cytolysis. In this study we identified a novel 44-kD surface molecule (NKp44) that is absent in freshly isolated peripheral blood lymphocytes but is progressively expressed by all NK cells in vitro after culture in IL-2. Different from other markers of cell activation such as CD69 or VLA.2, NKp44 is absent in activated T lymphocytes or T cell clones. Since NKp44 was not detected in any of the other cell lineages analyzed, it appears as the first marker specific for activated human NK cells. Monoclonal antibody (mAb)–mediated cross-linking of NKp44 in cloned NK cells resulted in strong activation of target cell lysis in a redirected killing assay. This data indicated that NKp44 can mediate triggering of NK cell cytotoxicity. mAb-mediated masking of NKp44 resulted in partial inhibition of cytolytic activity against certain (FcγR-negative) NK-susceptible target cells. This inhibition was greatly increased by the simultaneous masking of p46, another recently identified NK-specific triggering surface molecule. These data strongly suggest that NKp44 functions as a triggering receptor selectively expressed by activated NK cells that, together with p46, may be involved in the process of non-MHC-restricted lysis. Finally, we show that p46 and NKp44 are coupled to the intracytoplasmic transduction machinery via the association with CD3ζ or KARAP/DAP12, respectively; these associated molecules are tyrosine phosphorylated upon NK cell stimulation.