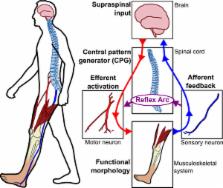 Journal: Journal of NeuroEngineering and Rehabilitation

Technological advancements have led to the development of numerous wearable robotic devices for the physical assistance and restoration of human locomotion. While many challenges remain with respect to the mechanical design of such devices, it is at least equally challenging and important to develop strategies to control them in concert with the intentions of the user.

This work reviews the state-of-the-art techniques for controlling portable active lower limb prosthetic and orthotic (P/O) devices in the context of locomotive activities of daily living (ADL), and considers how these can be interfaced with the user’s sensory-motor control system. This review underscores the practical challenges and opportunities associated with P/O control, which can be used to accelerate future developments in this field. Furthermore, this work provides a classification scheme for the comparison of the various control strategies.

As a novel contribution, a general framework for the control of portable gait-assistance devices is proposed. This framework accounts for the physical and informatic interactions between the controller, the user, the environment, and the mechanical device itself. Such a treatment of P/Os – not as independent devices, but as actors within an ecosystem – is suggested to be necessary to structure the next generation of intelligent and multifunctional controllers.

Each element of the proposed framework is discussed with respect to the role that it plays in the assistance of locomotion, along with how its states can be sensed as inputs to the controller. The reviewed controllers are shown to fit within different levels of a hierarchical scheme, which loosely resembles the structure and functionality of the nominal human central nervous system (CNS). Active and passive safety mechanisms are considered to be central aspects underlying all of P/O design and control, and are shown to be critical for regulatory approval of such devices for real-world use.

The works discussed herein provide evidence that, while we are getting ever closer, significant challenges still exist for the development of controllers for portable powered P/O devices that can seamlessly integrate with the user’s neuromusculoskeletal system and are practical for use in locomotive ADL.

Luca Citi,  Christian Cipriani,  Jacopo Rigosa … (2014)
Hand loss is a highly disabling event that markedly affects the quality of life. To achieve a close to natural replacement for the lost hand, the user should be provided with the rich sensations that we naturally perceive when grasping or manipulating an object. Ideal bidirectional hand prostheses should involve both a reliable decoding of the user's intentions and the delivery of nearly "natural" sensory feedback through remnant afferent pathways, simultaneously and in real time. However, current hand prostheses fail to achieve these requirements, particularly because they lack any sensory feedback. We show that by stimulating the median and ulnar nerve fascicles using transversal multichannel intrafascicular electrodes, according to the information provided by the artificial sensors from a hand prosthesis, physiologically appropriate (near-natural) sensory information can be provided to an amputee during the real-time decoding of different grasping tasks to control a dexterous hand prosthesis. This feedback enabled the participant to effectively modulate the grasping force of the prosthesis with no visual or auditory feedback. Three different force levels were distinguished and consistently used by the subject. The results also demonstrate that a high complexity of perception can be obtained, allowing the subject to identify the stiffness and shape of three different objects by exploiting different characteristics of the elicited sensations. This approach could improve the efficacy and "life-like" quality of hand prostheses, resulting in a keystone strategy for the near-natural replacement of missing hands.

Guanglin Li,  K Englehart,  Robert D. Lipschutz … (2009)
Improving the function of prosthetic arms remains a challenge, because access to the neural-control information for the arm is lost during amputation. A surgical technique called targeted muscle reinnervation (TMR) transfers residual arm nerves to alternative muscle sites. After reinnervation, these target muscles produce electromyogram (EMG) signals on the surface of the skin that can be measured and used to control prosthetic arms. To assess the performance of patients with upper-limb amputation who had undergone TMR surgery, using a pattern-recognition algorithm to decode EMG signals and control prosthetic-arm motions. Study conducted between January 2007 and January 2008 at the Rehabilitation Institute of Chicago among 5 patients with shoulder-disarticulation or transhumeral amputations who underwent TMR surgery between February 2002 and October 2006 and 5 control participants without amputation. Surface EMG signals were recorded from all participants and decoded using a pattern-recognition algorithm. The decoding program controlled the movement of a virtual prosthetic arm. All participants were instructed to perform various arm movements, and their abilities to control the virtual prosthetic arm were measured. In addition, TMR patients used the same control system to operate advanced arm prosthesis prototypes. Performance metrics measured during virtual arm movements included motion selection time, motion completion time, and motion completion ("success") rate. The TMR patients were able to repeatedly perform 10 different elbow, wrist, and hand motions with the virtual prosthetic arm. For these patients, the mean motion selection and motion completion times for elbow and wrist movements were 0.22 seconds (SD, 0.06) and 1.29 seconds (SD, 0.15), respectively. These times were 0.06 seconds and 0.21 seconds longer than the mean times for control participants. For TMR patients, the mean motion selection and motion completion times for hand-grasp patterns were 0.38 seconds (SD, 0.12) and 1.54 seconds (SD, 0.27), respectively. These patients successfully completed a mean of 96.3% (SD, 3.8) of elbow and wrist movements and 86.9% (SD, 13.9) of hand movements within 5 seconds, compared with 100% (SD, 0) and 96.7% (SD, 4.7) completed by controls. Three of the patients were able to demonstrate the use of this control system in advanced prostheses, including motorized shoulders, elbows, wrists, and hands. These results suggest that reinnervated muscles can produce sufficient EMG information for real-time control of advanced artificial arms.

Human population: the next half century.

Paula Cohen (2003)
By 2050, the human population will probably be larger by 2 to 4 billion people, more slowly growing (declining in the more developed regions), more urban, especially in less developed regions, and older than in the 20th century. Two major demographic uncertainties in the next 50 years concern international migration and the structure of families. Economies, nonhuman environments, and cultures (including values, religions, and politics) strongly influence demographic changes. Hence, human choices, individual and collective, will have demographic effects, intentional or otherwise.