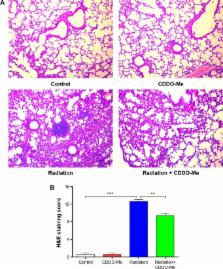 The C-28 methyl ester of 2-cyano-3,12-dioxoolean-1,9-dien-28-oic acid (CDDO-Me), one of the synthetic triterpenoids, has been found to have potent anti-inflammatory and anticancer properties in vitro and in vivo. However, its usefulness in mitigating radiation-induced lung injury (RILI), including radiation-induced lung inflammation and fibrosis, has not been tested. The aim of this study was to explore the therapeutic effect of CDDO-Me on RILI in mice and the underlying mechanisms. Herein, we found that administration of CDDO-Me improved the histopathological score, reduced the number of inflammatory cells and concentrations of total protein in bronchoalveolar lavage fluid, suppressed secretion and expression of proinflammatory cytokines, including transforming growth factor-β and interleukin-6, elevated expression of the anti-inflammatory cytokine interleukin-10, and downregulated the mRNA level of profibrotic genes, including for fibronectin, α-smooth muscle actin, and collagen I. CDDO-Me attenuated radiation-induced lung inflammation. CDDO-Me also decreased the Masson’s trichrome stain score, hydroxyproline content, and mRNA level of profibrotic genes, and blocked radiation-induced collagen accumulation and fibrosis. Collectively, these findings suggest that CDDO-Me ameliorates radiation-induced lung inflammation and fibrosis, and this synthetic triterpenoid is a promising novel therapeutic agent for RILI. Further mechanistic, efficacy, and safety studies are warranted to elucidate the role of CDDO-Me in the management of RILI.

Simple method of estimating severity of pulmonary fibrosis on a numerical scale.

Anthony Ashcroft,  Matthew Simpson,  V. Timbrell (1988)
A continuous numerical scale for determining the degree of fibrosis in lung specimens was devised for correlation with other pulmonary variables such as lung function tests or mineral burden. Grading was scored on a scale from 0 to 8, using the average of microscope field scores. The system allows fibrosis to be measured in small samples of tissue (1 cm) which can provide a detailed description of the changes in a lung, currently not possible with most existing methods.

The biology of interleukin-2 and interleukin-15: implications for cancer therapy and vaccine design.

Thomas Waldmann (2006)
Interleukin-2 and interleukin-15 have pivotal roles in the control of the life and death of lymphocytes. Although their heterotrimeric receptors have two receptor subunits in common, these two cytokines have contrasting roles in adaptive immune responses. The unique role of interleukin-2 is in the elimination of self-reactive T cells to prevent autoimmunity. By contrast, interleukin-15 is dedicated to the prolonged maintenance of memory T-cell responses to invading pathogens. As discussed in this Review, the biology of these cytokines will affect the development of novel therapies for malignancy and autoimmune diseases, as well as the design of vaccines against infectious diseases.

Dirk Pohlers,  Julia Brenmoehl,  Ivonne Löffler … (2009)
The action of transforming-growth-factor (TGF)-beta following inflammatory responses is characterized by increased production of extracellular matrix (ECM) components, as well as mesenchymal cell proliferation, migration, and accumulation. Thus, TGF-beta is important for the induction of fibrosis often associated with chronic phases of inflammatory diseases. This common feature of TGF-related pathologies is observed in many different organs. Therefore, in addition to the description of the common TGF-beta-pathway, this review focuses on TGF-beta-related pathogenetic effects in different pathologies/organs, i. e., arthritis, diabetic nephropathy, colitis/Crohn's disease, radiation-induced fibrosis, and myocarditis (including their similarities and dissimilarities). However, TGF-beta exhibits both exacerbating and ameliorating features, depending on the phase of disease and the site of action. Due to its central role in severe fibrotic diseases, TGF-beta nevertheless remains an attractive therapeutic target, if targeted locally and during the fibrotic phase of disease.