Esthetic Rehabilitation of Anterior Teeth with Copy-Milled Restorations: A Report of Two Cases 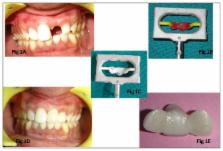 Digitalization has become part and parcel of contemporary prosthodontics with the probability of most of the procedures being based on the digital techniques in the near future. This digital revolution started in the latter half of the 20th century by converting analog objects/signals into digital bits and bytes. Recent developments in all-ceramic materials and systems of computer-aided designing and computer-aided manufacturing (CAD/CAM), copy milling, and so forth offer excellent esthetics and superb biocompatibility. Copy milling system for ceramics enables milling of the zirconia cores of all-ceramic restorations precisely and also if this system is properly used the procedure for fabricating all-ceramic restorations can be substantially simplified. This case report presents fabrication of all-ceramic Maryland Bridge and post-core with a copy milling system for esthetics and preservation of integrity of tooth. For both of the patients, the use of biologic, all-ceramic, copy-milled restorations resulted in clinical success and recovered function and esthetics.

The use of CAD/CAM in dentistry.

Philip Kotick,  G Davidowitz (2011)
Computer-aided design (CAD) and computer-aided manufacturing (CAM) have become an increasingly popular part of dentistry over the past 25 years. The technology, which is used in both the dental laboratory and the dental office, can be applied to inlays, onlays, veneers, crowns, fixed partial dentures, implant abutments, and even full-mouth reconstruction. This article discusses the history of CAD/CAM in dentistry and gives an overview of how it works. It also provides information on the advantages and disadvantages, describes the main products available, discusses how to incorporate the new technology into your practice, and addresses future applications. Copyright © 2011 Elsevier Inc. All rights reserved.

Wade T A Watson,  Yoav Finer,  Omar El-Mounayri … (2008)
All-ceramic crowns are subject to fracture during function, especially in the posterior area. The use of yttrium-stabilized zirconium-oxide ceramic as a substructure for all-ceramic crowns to improve fracture resistance is unproven. The aim of this study was to compare fracture strength and fatigue resistance of new zirconium-oxide and feldspathic all-ceramic crowns made with computer-aided design/computer-aided manufacturing (CAD/CAM). An ivorine molar was prepared to receive an all-ceramic crown. Using epoxy resin, 40 replication dies were made of the prepared tooth. Twenty feldspathic all-ceramic crowns (Vita Mark II) (VMII) and 20 zirconium-oxide crown copings (In-Ceram YZ) (YZ) were made using CAD/CAM technique (CEREC-3D). The YZ copings were sintered and veneered manually with a fine-particle ceramic (VM9). All crowns were cemented to their respective dies using resin cement (Panavia F 2.0). Ten crowns in each group were subjected to compressive fatigue loading in a universal testing machine (instron). The other ten crowns from each group were loaded to fracture at a crosshead speed of 1 mm/min. Data were statistically analyzed using independent t-test and Fisher's exact test at alpha= 0.05. There was a significant difference between the survival rates of the two materials during the fatigue test (p < 0.001). All VMII crowns survived without any crack formation, while all YZ crowns fractured (40%) or developed cracks (60%). All the YZ crown fractures occurred within the veneering layer during the fatigue test. There was no significant difference in mean fracture load between the two materials (p= 0.268). Mean fracture loads (standard deviation) in N were: 1459 (492) for YZ crowns and 1272 (109) for VMII crowns. The performance of VMII crowns was superior to YZ crowns in the fatigue test. The premature fractures and cracks of the YZ crowns were attributed to weakness in the YZ veneer layer or in the core/veneer bond.

Faruk Dilmener,  Mehmet Dalkiz,  Cumhur Sipahi (2006)
Despite their esthetic properties, the fracture resistance of newly introduced esthetic post-and-core systems has not been studied, restricting clinical use. The purpose of this study was to determine and compare the fracture resistances of 3 recently introduced esthetic post-and-core systems with a cast metal post and core using a clinically related test method. Forty recently extracted caries-free maxillary central incisors were selected, sectioned, and their roots endodontically treated. The roots were then embedded in acrylic resin blocks and assigned to 4 experimental groups (n = 10). The cast metal (Wiron 99) post-and-core group (CMDC) served as the control. Three experimental groups consisted of a stainless steel post/composite-resin (Charisma) core group (SCOM), zirconium dioxide post/composite-resin (Charisma) core group (ZCOM), and zirconium dioxide post/ceramic (Cosmopost) core group (ZCER). The post spaces were prepared, posts were seated, cores were formed, and 40 post-and-core foundations were cemented into the roots. Following thermal cycling (5000 cycles between 5 degrees C and 55 degrees C with a dwell time of 30 seconds), a compressive load was applied to the inclined surface of each specimen at a 130-degree angle to the specimen long axes in a universal testing machine at a crosshead speed of 1 mm/min until failure occurred. Force to failure (N) was recorded. Data were analyzed with a 1-way analysis of variance and Bonferroni tests to determine the difference between the groups (alpha=.05). For pairwise comparisons among group mean values, P < .0083 indicated statistical significance and established the overall confidence level at 95%. Groups CMDC (738.6 N +/- 10.2) and ZCER (710.2 N +/- 5.3) exhibited the highest resistance to fracture. The ZCOM group showed the lowest fracture resistance (450.3 N +/- 5.7). The fracture resistance of the SCOM group (565 N +/- 7.2) was lower than the CMDC and ZCER groups, and higher than the ZCOM group. The differences among the groups were significant (P < .001) except for CMDC and ZCER (P < .016). Within the limitations of this study, the cast metal post/core and zirconia post/ceramic core foundations were found to be more fracture resistant than the zirconia post/composite-resin core and stainless steel post/composite-resin core foundations. Aside from its desirable esthetic properties, the zirconia post/ceramic core combination demonstrated high resistance to fracture.