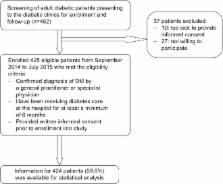 Hypertension is one of the recognized risk factors of cardiovascular diseases in adult diabetic patients. High prevalence of suboptimal blood pressure (BP) control has been well documented in the majority of studies assessing BP control in diabetic patients in sub-Saharan Africa. In Uganda, there is a dearth of similar studies. This study evaluated the prevalence and correlates of suboptimal BP control in an adult diabetic population in Uganda.

Suboptimal BP control was highly prevalent in this study population. Strategies to improve optimal BP control, especially in the private hospitals, and the use of statin therapy should be encouraged in adult diabetic patients.

Rury R Holman,  Sanjoy K Paul,  M Angelyn Bethel … (2008)
Post-trial monitoring of patients in the United Kingdom Prospective Diabetes Study (UKPDS) examined whether risk reductions for microvascular and macrovascular disease, achieved with the use of improved blood-pressure control during the trial, would be sustained. Among 5102 UKPDS patients with newly diagnosed type 2 diabetes mellitus, we randomly assigned, over a 4-year period beginning in 1987, 1148 patients with hypertension to tight or less-tight blood-pressure control regimens. The 884 patients who underwent post-trial monitoring were asked to attend annual UKPDS clinics for the first 5 years, but no attempt was made to maintain their previously assigned therapies. Annual questionnaires completed by patients and general practitioners were used to follow patients who were unable to attend the clinic in years 1 through 5, and questionnaires were used for all patients in years 6 to 10. Seven prespecified aggregate clinical end points were examined on an intention-to-treat basis, according to the previous randomization categories. Differences in blood pressure between the two groups during the trial disappeared within 2 years after termination of the trial. Significant relative risk reductions found during the trial for any diabetes-related end point, diabetes-related death, microvascular disease, and stroke in the group receiving tight, as compared with less tight, blood-pressure control were not sustained during the post-trial follow-up. No risk reductions were seen during or after the trial for myocardial infarction or death from any cause, but a risk reduction for peripheral vascular disease associated with tight blood-pressure control became significant (P=0.02). The benefits of previously improved blood-pressure control were not sustained when between-group differences in blood pressure were lost. Early improvement in blood-pressure control in patients with both type 2 diabetes and hypertension was associated with a reduced risk of complications, but it appears that good blood-pressure control must be continued if the benefits are to be maintained. (UKPDS 81; Current Controlled Trials number, ISRCTN75451837.) 2008 Massachusetts Medical Society