The Effects of the Contact Activation System on Hemorrhage 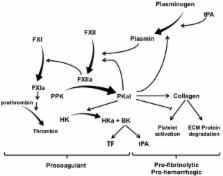 The contact activation system (CAS) exerts effects on coagulation via multiple mechanisms, which modulate both the intrinsic and extrinsic coagulation cascades as well as fibrinolysis and platelet activation. While the effects of the CAS on blood coagulation measured as activated partial thromboplastin time shortening are well documented, genetic mutations that result in deficiencies in the expression of either plasma prekallikrein (PPK) or factor XII (FXII) are not associated with spontaneous bleeding or increased bleeding risk during surgery. Deficiencies in these proteins are often undiagnosed for decades and detected later in life during routine coagulation assays without an apparent clinical phenotype. Increased interest in the CAS as a potentially safe target for antithrombotic therapies has emerged, in large part, from studies on animal models with provoked thrombosis, which have shown that deficiencies in PPK or FXII can reduce thrombus formation without increasing bleeding. Gene targeting and pharmacological studies in healthy animals have confirmed that PPK and FXII blockade does not cause coagulopathies. These findings support the conclusion that CAS is not required for hemostasis. However, while deficiencies in FXII and PPK do not significantly affect bleeding associated with peripheral wounds, recent reports have demonstrated that these proteins can promote hemorrhage in the retina and brain. Intravitreal injection of plasma kallikrein (PKal) induces retinal hemorrhage and intracerebral injection of PKal increases intracranial bleeding. PPK deficiency and PKal inhibition ameliorates hematoma formation following cerebrovascular injury in diabetic animals. Moreover, both PPK and FXII deficiency are protective against intracerebral hemorrhage caused by tissue plasminogen activator-mediated thrombolytic therapy in mice with thrombotic middle cerebral artery occlusion. Thus, while the CAS is not required for hemostasis, its inhibition may provide an opportunity to reduce hemorrhage in the retina and brain. Characterization of the mechanisms and potential clinical implications associated with the effects of the CAS on hemorrhage requires further consideration of the effects of PPK and FXII on hemorrhage beyond their putative effects on coagulation cascades. Here, we review the experimental and clinical evidence on the effects of the CAS on bleeding and hemostatic mechanisms.

Reviews of mathematical modeling in cancer

Thomas Renné, Miroslava Požgajovà, Sabine Grüner … (2005)
Blood coagulation is thought to be initiated by plasma protease factor VIIa in complex with the membrane protein tissue factor. In contrast, coagulation factor XII (FXII)–mediated fibrin formation is not believed to play an important role for coagulation in vivo. We used FXII-deficient mice to study the contributions of FXII to thrombus formation in vivo. Intravital fluorescence microscopy and blood flow measurements in three distinct arterial beds revealed a severe defect in the formation and stabilization of platelet-rich occlusive thrombi. Although FXII-deficient mice do not experience spontaneous or excessive injury-related bleeding, they are protected against collagen- and epinephrine-induced thromboembolism. Infusion of human FXII into FXII-null mice restored injury-induced thrombus formation. These unexpected findings change the long-standing concept that the FXII-induced intrinsic coagulation pathway is not important for clotting in vivo. The results establish FXII as essential for thrombus formation, and identify FXII as a novel target for antithrombotic therapy.

Marco Cicardi, Aleena Banerji, Francisco Bracho … (2010)
Hereditary angioedema is characterized by recurrent attacks of angioedema of the skin, larynx, and gastrointestinal tract. Bradykinin is the key mediator of symptoms. Icatibant is a selective bradykinin B2 receptor antagonist. In two double-blind, randomized, multicenter trials, we evaluated the effect of icatibant in patients with hereditary angioedema presenting with cutaneous or abdominal attacks. In the For Angioedema Subcutaneous Treatment (FAST) 1 trial, patients received either icatibant or placebo; in FAST-2, patients received either icatibant or oral tranexamic acid, at a dose of 3 g daily for 2 days. Icatibant was given once, subcutaneously, at a dose of 30 mg. The primary end point was the median time to clinically significant relief of symptoms. A total of 56 and 74 patients underwent randomization in the FAST-1 and FAST-2 trials, respectively. The primary end point was reached in 2.5 hours with icatibant versus 4.6 hours with placebo in the FAST-1 trial (P=0.14) and in 2.0 hours with icatibant versus 12.0 hours with tranexamic acid in the FAST-2 trial (P<0.001). In the FAST-1 study, 3 recipients of icatibant and 13 recipients of placebo needed treatment with rescue medication. The median time to first improvement of symptoms, as assessed by patients and by investigators, was significantly shorter with icatibant in both trials. No icatibant-related serious adverse events were reported. In patients with hereditary angioedema having acute attacks, we found a significant benefit of icatibant as compared with tranexamic acid in one trial and a nonsignificant benefit of icatibant as compared with placebo in the other trial with regard to the primary end point. The early use of rescue medication may have obscured the benefit of icatibant in the placebo trial. (Funded by Jerini; ClinicalTrials.gov numbers, NCT00097695 and NCT00500656.)

Oscar Ratnoff, E Davie (1964)
A simple waterfall sequence is proposed to explain the function of the various protein clotting factors during the formation of the fibrin clot. When clotting is initiated, each cloting factor except fibrinogen is converted to a form that has enzymatic activity. This activation occurs in a sepwise sequence with each newly formed enzyme reacting with its specific substrate, converting it to an active enzyme.

Specialty section: This article was submitted to Hematology, a section of the journal Frontiers in Medicine