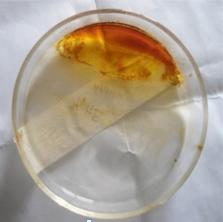 To examine the analgesic effect of alkaloids in Myristica fragrans seed in a mouse model of acetic acid-induced visceral pain.

Alkaloids were extracted from ground nutmeg seed kernels with 10% acetic acid in 95% ethyl alcohol. Visceral pain was induced in male and female BALB/c mice by intraperitoneal injection of 0.6% acetic acid. Analgesic effect of alkaloids (0.5 gram or 1 gram per kilogram [g/kg], by mouth) was assessed by evaluating writhing response. Acute toxicity was tested in response to 2, 3, 4, 5, or 6 g/kg of alkaloid extract; the median lethal dose (LD 50) was determined by probit analysis.

Alkaloid extract at a dose of 1 g/kg significantly reduced the number of writhing responses in female, but not male mice; 0.5 g/kg of alkaloid extract had no effect in either sex. The LD 50 was 5.1 g/kg. Signs of abnormal behavior, including hypoactivity, unstable gait, and dizziness were seen in animals given a dose of 4 g/kg or higher; abnormal behavior lasted for several hours after administration of the alkaloids.

According to the classification of Loomis and Hayes, M. fragrans seed alkaloids have analgesic activity and are slightly toxic.

Involvement of resident macrophages and mast cells in the writhing nociceptive response induced by zymosan and acetic acid in mice.