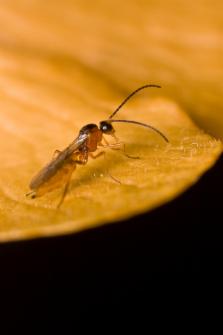 The checklist of British and Irish Braconidae is revised, based in large part on the collections of the National Museums of Scotland, Edinburgh, and the Natural History Museum, London. Distribution records are provided at the country level together with extensive synonymy and bibliography.

Of the 1,338 species regarded as valid, presumed native and certainly identified, 83 are here recorded for the first time from the British Isles. One new synonym is established ( Dyscritus suffolciensis Morley, 1933 = Syntretus splendidus (Marshall, 1887) syn. nov.)

The structure of an aphid-parasitoid community

THE POLYPHYLETIC NATURE OF APANTELES FOERSTER (HYMENOPTERA: BRACONIDAE): A PHYLOGENY AND RECLASSIFICATION OF MICROGASTRINAE

A molecular phylogeny of the Aphidiinae (Hymenoptera: Braconidae).

R Belshaw, D Quicke (1997)
Phylogenetic relationships within the Aphidiinae, and between this and other subfamilies of Braconidae (Hymenoptera), were investigated using sequence data from three genes: elongation factor-1alpha, cytochrome b, and the second expansion segment of the 28S ribosomal subunit. Variation in both protein-coding genes was characterized by a high level of homoplasy, but analysis of the expansion segment--robust over a range of alignment methods and parameters-resolved some of the older divergences. Parsimony analysis of the combined data suggests the following tribal relationships: (Ephedrini + (Praini + (Aphidiini + Trioxini))). In addition, the cyclostome subfamilies were found to form a clade separate from the Aphidiinae, but relationships between the Aphidiinae and the noncyclostome braconids could not be resolved. The inferred phylogeny also supported a secondary loss of internal pupation within the Praini and a polyphyletic origin of endoparasitism within the Braconidae.