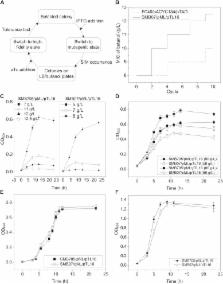 Microbial tolerance to different environmental stresses is of importance for efficient production of biofuels and biochemical. Such traits are often improved by evolutionary engineering approaches including mutagen-induced mutagenesis and successive passage. In contrast to these approaches which generate mutations in rapidly growing cells, recent research showed that mutations could be generated in non-dividing cells under stressful but non-lethal conditions, leading to the birth of the theory of stress-induced mutagenesis (SIM). A molecular mechanism of SIM has been elucidated to be mutagenic repair of DNA breaks. This inspired us to develop a synthetic SIM module to simulate the mutagenic cellular response so as to accelerate microbial adaptive evolution for an improved stress tolerance.

A controllable SIM evolution module was devised based on a genetic toggle switch in Escherichia coli. The synthetic module enables expression and repression of the genes related to up- and down-regulation responses during SIM in a bistable way. Upon addition of different inducers, the module can be turned on or off, triggering transition to a mutagenic or a high-fidelity state and thus allowing periodic adaptive evolution. Six genes ( recA, dinB, umuD, ropS, ropE, and nusA) in the up-regulation responses were evaluated for their potentials to enhance the SIM rate. Expression of recA, dinB, or ropS alone increased the SIM rate by 4.5- to 13.7-fold, whereas their combined expression improved the rate by 31.9-fold. Besides, deletion of mutL increased the SIM rate by 82-fold. Assembly of these genes into the SIM module in the mutL-deletion E. coli strain elevated the SIM rate by nearly 3000-fold. Accelerated adaptive evolution of E. coli equipped with this synthetic SIM module was demonstrated under n-butanol stress, with the minimal inhibitory concentration of n-butanol increasing by 56 % within 2.5 months.

A synthetic SIM module was constructed to simulate cellular mutagenic responses during SIM. Based on this, a novel evolutionary engineering approach—SIM-based adaptive evolution—was developed to improve the n-butanol tolerance of E. coli.

Eric M Paradise,  J. Maina Ndungu,  James Kirby … (2006)
Malaria is a global health problem that threatens 300-500 million people and kills more than one million people annually. Disease control is hampered by the occurrence of multi-drug-resistant strains of the malaria parasite Plasmodium falciparum. Synthetic antimalarial drugs and malarial vaccines are currently being developed, but their efficacy against malaria awaits rigorous clinical testing. Artemisinin, a sesquiterpene lactone endoperoxide extracted from Artemisia annua L (family Asteraceae; commonly known as sweet wormwood), is highly effective against multi-drug-resistant Plasmodium spp., but is in short supply and unaffordable to most malaria sufferers. Although total synthesis of artemisinin is difficult and costly, the semi-synthesis of artemisinin or any derivative from microbially sourced artemisinic acid, its immediate precursor, could be a cost-effective, environmentally friendly, high-quality and reliable source of artemisinin. Here we report the engineering of Saccharomyces cerevisiae to produce high titres (up to 100 mg l(-1)) of artemisinic acid using an engineered mevalonate pathway, amorphadiene synthase, and a novel cytochrome P450 monooxygenase (CYP71AV1) from A. annua that performs a three-step oxidation of amorpha-4,11-diene to artemisinic acid. The synthesized artemisinic acid is transported out and retained on the outside of the engineered yeast, meaning that a simple and inexpensive purification process can be used to obtain the desired product. Although the engineered yeast is already capable of producing artemisinic acid at a significantly higher specific productivity than A. annua, yield optimization and industrial scale-up will be required to raise artemisinic acid production to a level high enough to reduce artemisinin combination therapies to significantly below their current prices.

Haifang Wang,  Daniel R Church,  Farren J. Isaacs … (2009)
The breadth of genomic diversity found among organisms in nature allows populations to adapt to diverse environments. However, genomic diversity is difficult to generate in the laboratory and new phenotypes do not easily arise on practical timescales. Although in vitro and directed evolution methods have created genetic variants with usefully altered phenotypes, these methods are limited to laborious and serial manipulation of single genes and are not used for parallel and continuous directed evolution of gene networks or genomes. Here, we describe multiplex automated genome engineering (MAGE) for large-scale programming and evolution of cells. MAGE simultaneously targets many locations on the chromosome for modification in a single cell or across a population of cells, thus producing combinatorial genomic diversity. Because the process is cyclical and scalable, we constructed prototype devices that automate the MAGE technology to facilitate rapid and continuous generation of a diverse set of genetic changes (mismatches, insertions, deletions). We applied MAGE to optimize the 1-deoxy-D-xylulose-5-phosphate (DXP) biosynthesis pathway in Escherichia coli to overproduce the industrially important isoprenoid lycopene. Twenty-four genetic components in the DXP pathway were modified simultaneously using a complex pool of synthetic DNA, creating over 4.3 billion combinatorial genomic variants per day. We isolated variants with more than fivefold increase in lycopene production within 3 days, a significant improvement over existing metabolic engineering techniques. Our multiplex approach embraces engineering in the context of evolution by expediting the design and evolution of organisms with new and improved properties.