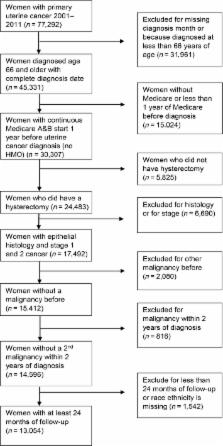 To assess differences in the receipt of preventive health services by race/ethnicity among older women with endometrial cancer enrolled in Medicare, we conducted a retrospective population‐based cohort study of women diagnosed with endometrial cancer from 2001 to 2011 in the Surveillance Epidemiology and End Results ( SEER)‐Medicare database. Women with stage I or II endometrial cancer of epithelial origin were included. The exposure was race/ethnicity (Non‐Hispanic [ NH] White, NH Black, Hispanic, and NH Asian/Pacific Islander [ PI]). The services examined were receipt of influenza vaccination and screening tests for diabetes mellitus, hyperlipidemia, and breast cancer. We used multivariate logistic regression to estimate odds ratios with 95% confidence intervals ( CI) adjusted for age, region, and year of diagnosis. A total of 13,054 women were included. In the 2 years after diagnosis, receipt of any influenza vaccine ranged from 45% among NH Black women to 67% among NH White women; receipt of a mammogram ranged from 65% among NH Black women to 74% among NH White women. Relative to NH White women, NH Black women had a lower likelihood of receiving both influenza vaccination (adjusted odds ratio [ aOR] 0.40, 95% CI 0.33–0.44) and screening mammography ( aOR 0.64, 95% CI 0.52–0.79). Hispanic women also were less likely to receive influenza vaccination than NH White women ( aOR 0.61, 95% CI 0.51–0.72). There were no significant differences across racial groups for diabetes or cholesterol screening services. Among older women with early‐stage endometrial cancer, racial disparities exist in the utilization of some preventive services.

A new method of classifying prognostic comorbidity in longitudinal studies: development and validation.

P Pompei,  M Charlson,  Tippi MacKenzie … (1986)
The objective of this study was to develop a prospectively applicable method for classifying comorbid conditions which might alter the risk of mortality for use in longitudinal studies. A weighted index that takes into account the number and the seriousness of comorbid disease was developed in a cohort of 559 medical patients. The 1-yr mortality rates for the different scores were: "0", 12% (181); "1-2", 26% (225); "3-4", 52% (71); and "greater than or equal to 5", 85% (82). The index was tested for its ability to predict risk of death from comorbid disease in the second cohort of 685 patients during a 10-yr follow-up. The percent of patients who died of comorbid disease for the different scores were: "0", 8% (588); "1", 25% (54); "2", 48% (25); "greater than or equal to 3", 59% (18). With each increased level of the comorbidity index, there were stepwise increases in the cumulative mortality attributable to comorbid disease (log rank chi 2 = 165; p less than 0.0001). In this longer follow-up, age was also a predictor of mortality (p less than 0.001). The new index performed similarly to a previous system devised by Kaplan and Feinstein. The method of classifying comorbidity provides a simple, readily applicable and valid method of estimating risk of death from comorbid disease for use in longitudinal studies. Further work in larger populations is still required to refine the approach because the number of patients with any given condition in this study was relatively small.

R Deyo (1992)
Administrative databases are increasingly used for studying outcomes of medical care. Valid inferences from such data require the ability to account for disease severity and comorbid conditions. We adapted a clinical comorbidity index, designed for use with medical records, for research relying on International Classification of Diseases (ICD-9-CM) diagnosis and procedure codes. The association of this adapted index with health outcomes and resource use was then examined with a sample of Medicare beneficiaries who underwent lumbar spine surgery in 1985 (n = 27,111). The index was associated in the expected direction with postoperative complications, mortality, blood transfusion, discharge to nursing home, length of hospital stay, and hospital charges. These associations were observed whether the index incorporated data from multiple hospitalizations over a year's time, or just from the index surgical admission. They also persisted after controlling for patient age. We conclude that the adapted comorbidity index will be useful in studies of disease outcome and resource use employing administrative databases.

Overweight, obesity, and mortality from cancer in a prospectively studied cohort of U.S. adults.

Eugenia E Calle,  Carmen Rodríguez,  Kimberly Walker-Thurmond … (2003)
The influence of excess body weight on the risk of death from cancer has not been fully characterized. In a prospectively studied population of more than 900,000 U.S. adults (404,576 men and 495,477 women) who were free of cancer at enrollment in 1982, there were 57,145 deaths from cancer during 16 years of follow-up. We examined the relation in men and women between the body-mass index in 1982 and the risk of death from all cancers and from cancers at individual sites, while controlling for other risk factors in multivariate proportional-hazards models. We calculated the proportion of all deaths from cancer that was attributable to overweight and obesity in the U.S. population on the basis of risk estimates from the current study and national estimates of the prevalence of overweight and obesity in the U.S. adult population. The heaviest members of this cohort (those with a body-mass index [the weight in kilograms divided by the square of the height in meters] of at least 40) had death rates from all cancers combined that were 52 percent higher (for men) and 62 percent higher (for women) than the rates in men and women of normal weight. For men, the relative risk of death was 1.52 (95 percent confidence interval, 1.13 to 2.05); for women, the relative risk was 1.62 (95 percent confidence interval, 1.40 to 1.87). In both men and women, body-mass index was also significantly associated with higher rates of death due to cancer of the esophagus, colon and rectum, liver, gallbladder, pancreas, and kidney; the same was true for death due to non-Hodgkin's lymphoma and multiple myeloma. Significant trends of increasing risk with higher body-mass-index values were observed for death from cancers of the stomach and prostate in men and for death from cancers of the breast, uterus, cervix, and ovary in women. On the basis of associations observed in this study, we estimate that current patterns of overweight and obesity in the United States could account for 14 percent of all deaths from cancer in men and 20 percent of those in women. Increased body weight was associated with increased death rates for all cancers combined and for cancers at multiple specific sites. Copyright 2003 Massachusetts Medical Society