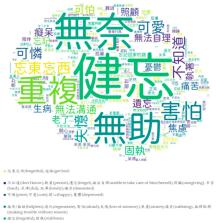 The purpose of this study was to examine the relationship between knowledge and attitudes towards dementia among adults. A cross-sectional online survey with purposive sampling was conducted in four district health centers in Taichung, Taiwan, in 2018. Knowledge was measured by the Taiwanese version of the Dementia Knowledge Assessment Scale. Attitudes towards people with dementia were measured by four kinds of feelings: discomfort, shame, avoidance, and fear. In total, 347 persons completed the questionnaire. Knowledge of dementia was modest. Higher education, a care-related background, chronic health conditions, experience caring for people with dementia, and knowledge of family history were related to higher knowledge of dementia. Attitudes towards people with dementia were grouped into four clusters: uncomfortable (22.2%), ashamed (2.6%), unfriendly (22.5%), and non-negative (52.7%). Knowledge of dementia was significantly related to the ashamed cluster but not to the other clusters. Lower education, a lack of caring experience, and a lack of knowledge of family history were related to uncomfortable feelings, and poorer financial satisfaction was related to uncomfortable, afraid, and avoidant feelings. The open-question expression of feelings towards dementia was more likely to be negative (55.3%). The public should be educated on knowledge of and friendly attitudes towards dementia.

A Nationwide Survey of Mild Cognitive Impairment and Dementia, Including Very Mild Dementia, in Taiwan

Chang-Yu Sun,  Huey-Jane Lee,  Shu-Chien Yang … (2014)
An increasing population of dementia patients produces substantial societal impacts. We assessed the prevalence of mild cognitive impairment (MCI) and all-cause dementia, including very mild dementia (VMD), in Taiwan. In a nationwide population-based cross-sectional survey, participants were selected by computerized random sampling from all 19 Taiwan counties and were enrolled between December 2011 and March 2013. Cases were identified through in-person interviews based on the National Institute on Aging-Alzheimer’s Association clinical criteria. Demographic data and histories involving mental status and function in daily living were collected. The principal objective assessments were the Taiwanese Mental Status Examination and Clinical Dementia Rating. In all, 10,432 people aged 65 years or older (mean age 76.2±6.7, 52.3% women) were interviewed. The age-adjusted prevalence of all-cause dementia was 8.04% (95% CI 7.47–8.61), including a 3.25% (95% CI 2.89–3.61) prevalence of VMD; that of MCI was 18.76% (95% CI 17.91–19.61). Women had a higher prevalence than men of both all-cause dementia (9.71% vs. 6.36%) and MCI (21.63% vs. 15.57%). MCI affects a considerable portion of the population aged 65 and above in Taiwan. The inclusion of VMD yields dementia prevalence rates higher than those previously reported from Taiwan. Old age, female gender, and a low educational level are significant associated factors.

The attitudes and practices of general practitioners regarding dementia diagnosis in Ireland.

R Coen,  Anna M Clark,  B Lawlor … (2008)
The diagnosis of dementia poses difficulties for general practitioners (GPs) particularly when access to specialist diagnostic services is delayed. Ireland is soon to witness an increase in numbers of people presenting with dementia, yet little is known about the service needs of GPs when attempting to diagnose dementia. To detail the service needs of GPs, especially their training needs, access to diagnostic resources such as CT and MRI brain scans and access to specialist services such as Old Age Psychiatry (OAP), Geriatric Medicine (GM) and Neuropsychology (NP). The paper is based on survey data collected from a sample of GPs (n = 300) registered with the Irish College of General Practitioners (ICGP) and on qualitative data collected from a Focus Group (n = 7). GPs were more likely to blame themselves than either the health care system, their patients or family members for the late presentation of dementia in primary care. Stigma was a major obstacle preventing GPs from being more proactive in this area. Rural GPs felt geographically disadvantaged accessing diagnostic services and both rural and urban GPs experienced considerable time delays accessing specialist diagnostic services. Findings provide compelling evidence that training and access to diagnostic services are only two of several different structural and ideological obstacles that GPs encounter when attempting to diagnose dementia. Future educational supports for GPs need to be developed which concentrate on these areas.

African American, Chinese, and Latino family caregivers' impressions of the onset and diagnosis of dementia: cross-cultural similarities and differences.

Jane Cloutterbuck,  Susan Neary,  Lin-Zhan … (2005)
We explored cross-cultural similarities and differences in minority family caregivers' perceptions of the onset and diagnosis of Alzheimer's disease in their relatives, with specific attention to clinical encounters. We performed a meta-synthesis of three qualitative studies conducted in Massachusetts with 22 African American, Latino, and Chinese caregivers. All participants conveyed striking similarities of thought about normalization of cognitive symptoms until one critical event, usually relocation, precipitated family awareness that an elder's behavior was not the result of "normal aging." A lack of knowledge about Alzheimer's disease, rather than culturally influenced beliefs, was the major deterrent to having an elder's memory assessed. Community physicians' failure to recognize Alzheimer's disease or refer to specialists was more problematic than language or ethnic differences. Physicians' disrespect for caregivers' concerns about memory loss was particularly noted by African Americans, stigmatization of persons with Alzheimer's disease was noted by Chinese, and fears that acculturation would end family home care was noted by Latinos. Amid ethnocultural differences, there are many similarities in needs that offer providers the possibility to unify quality improvements in Alzheimer's disease outreach, education, and physicians' services. Suggestions include providing the public with more confidential access to Alzheimer's disease information, increasing dementia awareness among community physicians, motivating clinicians to adopt culturally sensitive communication patterns, and providing community education to reduce normalization by families and stigmatization of persons with Alzheimer's disease.