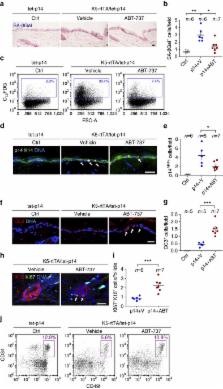 Senescent cells, formed in response to physiological and oncogenic stresses, facilitate protection from tumourigenesis and aid in tissue repair. However, accumulation of such cells in tissues contributes to age-related pathologies. Resistance of senescent cells to apoptotic stimuli may contribute to their accumulation, yet the molecular mechanisms allowing their prolonged viability are poorly characterized. Here we show that senescent cells upregulate the anti-apoptotic proteins BCL-W and BCL-XL. Joint inhibition of BCL-W and BCL-XL by siRNAs or the small-molecule ABT-737 specifically induces apoptosis in senescent cells. Notably, treatment of mice with ABT-737 efficiently eliminates senescent cells induced by DNA damage in the lungs as well as senescent cells formed in the epidermis by activation of p53 through transgenic p14 ARF. Elimination of senescent cells from the epidermis leads to an increase in hair-follicle stem cell proliferation. The finding that senescent cells can be eliminated pharmacologically paves the way to new strategies for the treatment of age-related pathologies. 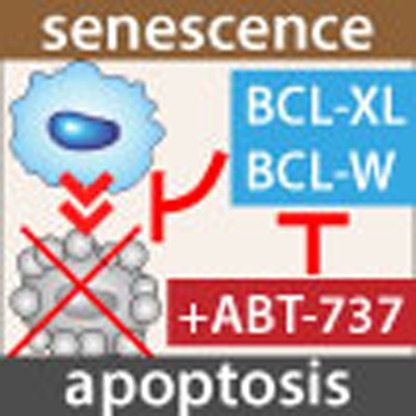 The accumulation of senescent cells within tissues plays a role in numerous age-related pathologies. Yosef and Pilpel et al. demonstrate that the resistance of these cells to apoptosis is driven by upregulation of survival proteins, whose pharmacological inhibition triggers senescent cell elimination in mice.

Judith Campisi (2013)
For most species, aging promotes a host of degenerative pathologies that are characterized by debilitating losses of tissue or cellular function. However, especially among vertebrates, aging also promotes hyperplastic pathologies, the most deadly of which is cancer. In contrast to the loss of function that characterizes degenerating cells and tissues, malignant (cancerous) cells must acquire new (albeit aberrant) functions that allow them to develop into a lethal tumor. This review discusses the idea that, despite seemingly opposite characteristics, the degenerative and hyperplastic pathologies of aging are at least partly linked by a common biological phenomenon: a cellular stress response known as cellular senescence. The senescence response is widely recognized as a potent tumor suppressive mechanism. However, recent evidence strengthens the idea that it also drives both degenerative and hyperplastic pathologies, most likely by promoting chronic inflammation. Thus, the senescence response may be the result of antagonistically pleiotropic gene action.

Y Haupt,  M Oren,  A Kazaz … (1997)
The p53 tumour-suppressor protein exerts antiproliferative effects, including growth arrest and apoptosis, in response to various types of stress. The activity of p53 is abrogated by mutations that occur frequently in tumours, as well as by several viral and cellular proteins. The Mdm2 oncoprotein is a potent inhibitor of p53. Mdm2 binds the transcriptional activation domain of p53 and blocks its ability to regulate target genes and to exert antiproliferative effects. On the other hand, p53 activates the expression of the mdm2 gene in an autoregulatory feedback loop. The interval between p53 activation and consequent Mdm2 accumulation defines a time window during which p53 exerts its effects. We now report that Mdm2 also promotes the rapid degradation of p53 under conditions in which p53 is otherwise stabilized. This effect of Mdm2 requires binding of p53; moreover, a small domain of p53, encompassing the Mdm2-binding site, confers Mdm2-dependent detstabilization upon heterologous proteins. Raised amounts of Mdm2 strongly repress mutant p53 accumulation in tumour-derived cells. During recovery from DNA damage, maximal Mdm2 induction coincides with rapid p53 loss. We propose that the Mdm2-promoted degradation of p53 provides a new mechanism to ensure effective termination of the p53 signal.

Andrea Lowe,  D Beach,  Solange Serrano … (1997)
Oncogenic ras can transform most immortal rodent cells to a tumorigenic state. However, transformation of primary cells by ras requires either a cooperating oncogene or the inactivation of tumor suppressors such as p53 or p16. Here we show that expression of oncogenic ras in primary human or rodent cells results in a permanent G1 arrest. The arrest induced by ras is accompanied by accumulation of p53 and p16, and is phenotypically indistinguishable from cellular senescence. Inactivation of either p53 or p16 prevents ras-induced arrest in rodent cells, and E1A achieves a similar effect in human cells. These observations suggest that the onset of cellular senescence does not simply reflect the accumulation of cell divisions, but can be prematurely activated in response to an oncogenic stimulus. Negation of ras-induced senescence may be relevant during multistep tumorigenesis.