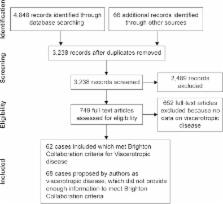 Ten electronic databases were searched with no restriction of date or language and reference lists of retrieved articles.

All serious adverse events that met the Brighton Classification criteria were associated with first YF vaccinations. Sixty-two published cases (35 died) met the Brighton Collaboration viscerotropic criteria, with 32 from the US, six from Brazil, five from Peru, three from Spain, two from the People’s Republic of China, one each from Argentina, Australia, Belgium, Ecuador, France, Germany, Ireland, New Zealand, Portugal, and the UK, and four with no country stated. Two cases met both the viscerotropic and YF vaccine-associated neurologic disease criteria. Seventy cases proposed by authors as viscerotropic disease did not meet any Brighton Collaboration viscerotropic level of diagnostic certainty or any YF vaccine-associated viscerotropic disease causality criteria (37 died).

The global distribution of yellow fever and dengue.

M G Leedy,  S Hay,  Nicholas Graham … (2005)
Yellow fever has been subjected to partial control for decades, but there are signs that case numbers are now increasing globally, with the risk of local epidemic outbreaks. Dengue case numbers have also increased dramatically during the past 40 years and different serotypes have invaded new geographical areas. Despite the temporal changes in these closely related diseases, and their enormous public health impact, few attempts have been made to collect a comprehensive dataset of their spatial and temporal distributions. For this review, records of the occurrence of both diseases during the 20th century have been collected together and are used to define their climatic limits using remotely sensed satellite data within a discriminant analytical model framework. The resulting risk maps for these two diseases identify their different environmental requirements, and throw some light on their potential for co-occurrence in Africa and South East Asia.

Thomas P. Monath (2005)
Yellow fever, a mosquito-borne viral hemorrhagic fever, is one of the most lethal diseases of humankind. The etiologic agent is the prototype member of the genus Flavivirus, family Flaviviridae, a group of small, enveloped, positive-sense, single-strand RNA viruses. Approximately one in seven people who become infected develop a rapidly progressive illness, with hepatitis, renal failure, hemorrhage and cardiovascular shock, with a case fatality rate of 20-50%. Yellow fever occurs in sub-Saharan Africa and tropical South America, where it remains a continuing public health problem of varying magnitude, depending on the level of vaccination coverage in the human population and cyclical, ecologic and climatic factors that influence virus transmission.

The estimated mortality impact of vaccinations forecast to be administered during 2011-2020 in 73 countries supported by the GAVI Alliance.

Ingrid Friberg,  S L Franzel,  N Schwalbe … (2013)
From August to December 2011, a multidisciplinary group with expertise in mathematical modeling was constituted by the GAVI Alliance and the Bill & Melinda Gates Foundation to estimate the impact of vaccination in 73 countries supported by the GAVI Alliance. The number of deaths averted in persons projected to be vaccinated during 2011-2020 was estimated for ten antigens: hepatitis B, yellow fever, Haemophilus influenzae type B (Hib), Streptococcus pneumoniae, rotavirus, Neisseria meningitidis serogroup A, Japanese encephalitis, human papillomavirus, measles, and rubella. Impact was calculated as the difference in the number of deaths expected over the lifetime of vaccinated cohorts compared to the number of deaths expected in those cohorts with no vaccination. Numbers of persons vaccinated were based on 2011 GAVI Strategic Demand Forecasts with projected dates of vaccine introductions, vaccination coverage, and target population size in each country. By 2020, nearly all GAVI-supported countries with endemic disease are projected to have introduced hepatitis B, Hib, pneumococcal, rotavirus, rubella, yellow fever, N. meningitidis serogroup A, and Japanese encephalitis-containing vaccines; 55 (75 percent) countries are projected to have introduced human papillomavirus vaccine. Projected use of these vaccines during 2011-2020 is expected to avert an estimated 9.9 million deaths. Routine and supplementary immunization activities with measles vaccine are expected to avert an additional 13.4 million deaths. Estimated numbers of deaths averted per 1000 persons vaccinated were highest for first-dose measles (16.5), human papillomavirus (15.1), and hepatitis B (8.3) vaccination. Approximately 52 percent of the expected deaths averted will be in Africa, 27 percent in Southeast Asia, and 13 percent in the Eastern Mediterranean. Vaccination of persons during 2011-2020 in 73 GAVI-eligible countries is expected to have substantial public health impact, particularly in Africa and Southeast Asia, two regions with high mortality. The actual impact of vaccination in these countries may be higher than our estimates because several widely used antigens were not included in the analysis. The quality of our estimates is limited by lack of data on underlying disease burden and vaccine effectiveness against fatal disease outcomes in developing countries. We plan to update the estimates annually to reflect updated demand forecasts, to refine model assumptions based on results of new information, and to extend the analysis to include morbidity and economic benefits. Copyright © 2013. Published by Elsevier Ltd.