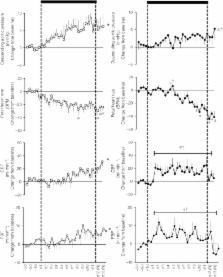 Journal: The Journal of Physiology

Although the fetal cardiovascular defence to acute hypoxia and the physiology underlying it have been established for decades, how the fetal cardiovascular system responds to chronic hypoxia has been comparatively understudied. We designed and created isobaric hypoxic chambers able to maintain pregnant sheep for prolonged periods of gestation under controlled significant (10% O 2) hypoxia, yielding fetal mean levels (11.5 ± 0.6 mmHg) similar to those measured in human fetuses of hypoxic pregnancy. We also created a wireless data acquisition system able to record fetal blood flow signals in addition to fetal blood pressure and heart rate from free moving ewes as the hypoxic pregnancy is developing. We determined in vivo longitudinal changes in fetal cardiovascular function including parallel measurement of fetal carotid and femoral blood flow and oxygen and glucose delivery during the last third of gestation. The ratio of oxygen (from 2.7 ± 0.2 to 3.8 ± 0.8; P < 0.05) and of glucose (from 2.3 ± 0.1 to 3.3 ± 0.6; P < 0.05) delivery to the fetal carotid, relative to the fetal femoral circulation, increased during and shortly after the period of chronic hypoxia. In contrast, oxygen and glucose delivery remained unchanged from baseline in normoxic fetuses. Fetal plasma urate concentration increased significantly during chronic hypoxia but not during normoxia (Δ: 4.8 ± 1.6  vs. 0.5 ± 1.4 μmol l −1, P<0.05). The data support the hypotheses tested and show persisting redistribution of substrate delivery away from peripheral and towards essential circulations in the chronically hypoxic fetus, associated with increases in xanthine oxidase‐derived reactive oxygen species.

Hydroxylation of HIF-1: oxygen sensing at the molecular level.

Gregg L. Semenza (2004)
The ability to sense and respond to changes in oxygenation represents a fundamental property of all metazoan cells. The discovery of the transcription factor HIF-1 has led to the identification of protein hydroxylation as a mechanism by which changes in PO2 are transduced to effect changes in gene expression.

Oxygen, the Janus gas; its effects on human placental development and function

Graham J. Burton (2008)
The accumulation of oxygen in the earth's atmosphere enabled metabolic pathways based on high-energy electron transfers that were capable of sustaining complex multicellular organisms to evolve. This advance came at a price, however, for the high reactivity of oxygen posed a major challenge as biological molecules became susceptible to oxidative damage, resulting in potential loss of function. Many extant physiological systems are therefore adapted, and homeostatically regulated, to supply sufficient oxygen to meet energy demands whilst also protecting cells, and mitochondria in particular, from excessive concentrations that could lead to oxidative damage. The invasive form of implantation displayed by the human conceptus presents particular challenges in this respect. During the first trimester, the conceptus develops in a low oxygen environment that favours organogenesis in the embryo, and cell proliferation and angiogenesis in the placenta. Later in pregnancy, higher oxygen concentrations are required to support the rapid growth of the fetus. This transition, which appears unique to the human placenta, must be negotiated safely for a successful pregnancy. Normally, onset of the maternal placental circulation is a progressive periphery-centre phenomenon, and is associated with extensive villous regression to form the chorion laeve. In cases of miscarriage, onset of the circulation is both precocious and disorganized, and excessive placental oxidative stress and villous regression undoubtedly contribute to loss of the pregnancy. Comparison of experimental and in vivo data indicates that fluctuations in placental oxygen concentration are a more powerful stimulus for the generation of oxidative stress than chronic hypoxia alone. Placental oxidative and endoplasmic reticulum stress appear to play key roles in the pathophysiology of complications of pregnancy, such as intrauterine growth restriction and preeclampsia, through their adverse impacts on placental function and growth. Establishing an inviolable maternal blood supply for the second and third trimesters is therefore one of the most crucial aspects of human placentation.

Dino Giussani (2016)
How the fetus withstands an environment of reduced oxygenation during life in the womb has been a vibrant area of research since this field was introduced by Joseph Barcroft, a century ago. Studies spanning five decades have since used the chronically instrumented fetal sheep preparation to investigate the fetal compensatory responses to hypoxia. This defence is contingent on the fetal cardiovascular system, which in late gestation adopts strategies to decrease oxygen consumption and redistribute the cardiac output away from peripheral vascular beds and towards essential circulations, such as those perfusing the brain. The introduction of simultaneous measurement of blood flow in the fetal carotid and femoral circulations by ultrasonic transducers has permitted investigation of the dynamics of the fetal brain sparing response for the first time. Now we know that major components of fetal brain sparing during acute hypoxia are triggered exclusively by a carotid chemoreflex and that they are modified by endocrine agents and the recently discovered vascular oxidant tone. The latter is determined by the interaction between nitric oxide and reactive oxygen species. The fetal brain sparing response matures as the fetus approaches term, in association with the prepartum increase in fetal plasma cortisol, and treatment of the preterm fetus with clinically relevant doses of synthetic steroids mimics this maturation. Despite intense interest into how the fetal brain sparing response may be affected by adverse intrauterine conditions, this area of research has been comparatively scant, but it is likely to take centre stage in the near future.