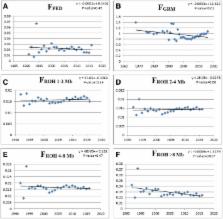 The aim of this study was to assess genome-wide autozygosity in a Nellore cattle population and to characterize ROH patterns and autozygosity islands that may have occurred due to selection within its lineages. It attempts also to compare estimates of inbreeding calculated from ROH (F ROH), genomic relationship matrix (F GRM), and pedigree-based coefficient (F PED).

The average number of ROH per animal was 55.15 ± 13.01 with an average size of 3.24 Mb. The Nellore genome is composed mostly by a high number of shorter segments accounting for 78% of all ROH, although the proportion of the genome covered by them was relatively small. The genome autozygosity proportion indicates moderate to high inbreeding levels for classical standards, with an average value of 7.15% (178.70 Mb). The average of F PED and F ROH, and their correlations (− 0.05 to 0.26) were low. Estimates of correlation between F GRM-F PED was zero, while the correlation (− 0.01 to − 0.07) between F GRM-F ROH decreased as a function of ROH length, except for F ROH > 8Mb (− 0.03). Overall, inbreeding coefficients were not high for the genotyped animals. Autozygosity islands were evident across the genome ( n = 62) and their genomic location did not largely differ within lineages. Enriched terms ( p < 0.01) associated with defense response to bacteria (GO:0042742), immune complex reaction (GO:0045647), pregnancy-associated glycoproteins genes (GO:0030163), and organism growth (GO:0040014) were described within the autozygotic islands.

Low F PED-F ROH correlation estimates indicate that F PED is not the most suitable method for capturing ancient inbreeding when the pedigree does not extend back many generations and F ROH should be used instead. Enriched terms ( p < 0.01) suggest a strong selection for immune response. Non-overlapping islands within the lineages greatly explain the mechanism underlying selection for functionally important traits in Nellore cattle.

Mehdi Sargolzaei,  Jacques P Chesnais,  Flavio S. Schenkel (2014)
Background Genotype imputation can help reduce genotyping costs particularly for implementation of genomic selection. In applications entailing large populations, recovering the genotypes of untyped loci using information from reference individuals that were genotyped with a higher density panel is computationally challenging. Popular imputation methods are based upon the Hidden Markov model and have computational constraints due to an intensive sampling process. A fast, deterministic approach, which makes use of both family and population information, is presented here. All individuals are related and, therefore, share haplotypes which may differ in length and frequency based on their relationships. The method starts with family imputation if pedigree information is available, and then exploits close relationships by searching for long haplotype matches in the reference group using overlapping sliding windows. The search continues as the window size is shrunk in each chromosome sweep in order to capture more distant relationships. Results The proposed method gave higher or similar imputation accuracy than Beagle and Impute2 in cattle data sets when all available information was used. When close relatives of target individuals were present in the reference group, the method resulted in higher accuracy compared to the other two methods even when the pedigree was not used. Rare variants were also imputed with higher accuracy. Finally, computing requirements were considerably lower than those of Beagle and Impute2. The presented method took 28 minutes to impute from 6 k to 50 k genotypes for 2,000 individuals with a reference size of 64,429 individuals. Conclusions The proposed method efficiently makes use of information from close and distant relatives for accurate genotype imputation. In addition to its high imputation accuracy, the method is fast, owing to its deterministic nature and, therefore, it can easily be used in large data sets where the use of other methods is impractical.

Syed Haider,  Benoit Ballester,  Damian Smedley … (2009)
BioMart Central Portal (www.biomart.org) offers a one-stop shop solution to access a wide array of biological databases. These include major biomolecular sequence, pathway and annotation databases such as Ensembl, Uniprot, Reactome, HGNC, Wormbase and PRIDE; for a complete list, visit, http://www.biomart.org/biomart/martview. Moreover, the web server features seamless data federation making cross querying of these data sources in a user friendly and unified way. The web server not only provides access through a web interface (MartView), it also supports programmatic access through a Perl API as well as RESTful and SOAP oriented web services. The website is free and open to all users and there is no login requirement.