Inflammation and EMT: an alliance towards organ fibrosis and cancer progression 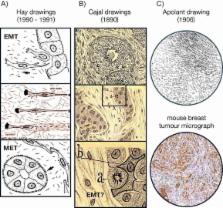 Recent advances in our understanding of the molecular pathways that govern the association of inflammation with organ fibrosis and cancer point to the epithelial to mesenchymal transition (EMT) as the common link in the progression of these devastating diseases. The EMT is a crucial process in the development of different tissues in the embryo and its reactivation in the adult may be regarded as a physiological attempt to control inflammatory responses and to ‘heal’ damaged tissue. However, in pathological contexts such as in tumours or during the development of organ fibrosis, this healing response adopts a sinister nature, steering these diseases towards metastasis and organ failure. Importantly, the chronic inflammatory microenvironment common to fibrotic and cancer cells emerges as a decisive factor in the induction of the pathological EMT.

M. L. Yin,  J Diebold,  G Proetzel … (1992)
Transforming growth factor-beta 1 (TGF-beta 1) is a multifunctional growth factor that has profound regulatory effects on many developmental and physiological processes. Disruption of the TGF-beta 1 gene by homologous recombination in murine embryonic stem cells enables mice to be generated that carry the disrupted allele. Animals homozygous for the mutated TGF-beta 1 allele show no gross developmental abnormalities, but about 20 days after birth they succumb to a wasting syndrome accompanied by a multifocal, mixed inflammatory cell response and tissue necrosis, leading to organ failure and death. TGF-beta 1-deficient mice may be valuable models for human immune and inflammatory disorders, including autoimmune diseases, transplant rejection and graft versus host reactions.

S Legrand,  Geoffrey Gloire,  Jacques Piette (2006)
The transcription factor NF-kappaB plays a major role in coordinating innate and adaptative immunity, cellular proliferation, apoptosis and development. Since the discovery in 1991 that NF-kappaB may be activated by H(2)O(2), several laboratories have put a considerable effort into dissecting the molecular mechanisms underlying this activation. Whereas early studies revealed an atypical mechanism of activation, leading to IkappaBalpha Y42 phosphorylation independently of IkappaB kinase (IKK), recent findings suggest that H(2)O(2) activates NF-kappaB mainly through the classical IKK-dependent pathway. The molecular mechanisms leading to IKK activation are, however, cell-type specific and will be presented here. In this review, we also describe the effect of other ROS (HOCl and (1)O(2)) and reactive nitrogen species on NF-kappaB activation. Finally, we critically review the recent data highlighting the role of ROS in NF-kappaB activation by proinflammatory cytokines (TNF-alpha and IL-1beta) and lipopolysaccharide (LPS), two major components of innate immunity.

H Sugimoto,  David Charytan,  Jun-ichi Hanai … (2003)
Bone morphogenic protein (BMP)-7 is a 35-kDa homodimeric protein and a member of the transforming growth factor (TGF)-beta superfamily. BMP-7 expression is highest in the kidney, and its genetic deletion in mice leads to severe impairment of eye, skeletal and kidney development. Here we report that BMP-7 reverses TGF-beta1-induced epithelial-to-mesenchymal transition (EMT) by reinduction of E-cadherin, a key epithelial cell adhesion molecule. Additionally, we provide molecular evidence for Smad-dependent reversal of TGF-beta1-induced EMT by BMP-7 in renal tubular epithelial cells and mammary ductal epithelial cells. In the kidney, EMT-induced accumulation of myofibroblasts and subsequent tubular atrophy are considered key determinants of renal fibrosis during chronic renal injury. We therefore tested the potential of BMP-7 to reverse TGF-beta1-induced de novo EMT in a mouse model of chronic renal injury. Our results show that systemic administration of recombinant human BMP-7 leads to repair of severely damaged renal tubular epithelial cells, in association with reversal of chronic renal injury. Collectively, these results provide evidence of cross talk between BMP-7 and TGF-beta1 in the regulation of EMT in health and disease.