Microbial interactions within the plant holobiont 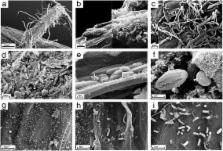 Since the colonization of land by ancestral plant lineages 450 million years ago, plants and their associated microbes have been interacting with each other, forming an assemblage of species that is often referred to as a “holobiont.” Selective pressure acting on holobiont components has likely shaped plant-associated microbial communities and selected for host-adapted microorganisms that impact plant fitness. However, the high microbial densities detected on plant tissues, together with the fast generation time of microbes and their more ancient origin compared to their host, suggest that microbe-microbe interactions are also important selective forces sculpting complex microbial assemblages in the phyllosphere, rhizosphere, and plant endosphere compartments. Reductionist approaches conducted under laboratory conditions have been critical to decipher the strategies used by specific microbes to cooperate and compete within or outside plant tissues. Nonetheless, our understanding of these microbial interactions in shaping more complex plant-associated microbial communities, along with their relevance for host health in a more natural context, remains sparse. Using examples obtained from reductionist and community-level approaches, we discuss the fundamental role of microbe-microbe interactions (prokaryotes and micro-eukaryotes) for microbial community structure and plant health. We provide a conceptual framework illustrating that interactions among microbiota members are critical for the establishment and the maintenance of host-microbial homeostasis.

Lisa Friedman,  Shild Vik,  Roberto Kolter … (2004)
Microbes often construct and live within surface-associated multicellular communities known as biofilms. The precise structure, chemistry and physiology of the biofilm all vary with the nature of its resident microbes and local environment. However, an important commonality among biofilms is that their structural integrity critically depends upon an extracellular matrix produced by their constituent cells. Extracellular matrices might be as diverse as biofilms, and they contribute significantly to the organization of the community. This review discusses recent advances in our understanding of the extracellular matrix and its role in biofilm biology.

Dayakar V. Badri,  Jorge Vivanco,  Jacqueline M. Chaparro (2014)
There is a concerted understanding of the ability of root exudates to influence the structure of rhizosphere microbial communities. However, our knowledge of the connection between plant development, root exudation and microbiome assemblage is limited. Here, we analyzed the structure of the rhizospheric bacterial community associated with Arabidopsis at four time points corresponding to distinct stages of plant development: seedling, vegetative, bolting and flowering. Overall, there were no significant differences in bacterial community structure, but we observed that the microbial community at the seedling stage was distinct from the other developmental time points. At a closer level, phylum such as Acidobacteria, Actinobacteria, Bacteroidetes, Cyanobacteria and specific genera within those phyla followed distinct patterns associated with plant development and root exudation. These results suggested that the plant can select a subset of microbes at different stages of development, presumably for specific functions. Accordingly, metatranscriptomics analysis of the rhizosphere microbiome revealed that 81 unique transcripts were significantly (P<0.05) expressed at different stages of plant development. For instance, genes involved in streptomycin synthesis were significantly induced at bolting and flowering stages, presumably for disease suppression. We surmise that plants secrete blends of compounds and specific phytochemicals in the root exudates that are differentially produced at distinct stages of development to help orchestrate rhizosphere microbiome assemblage.