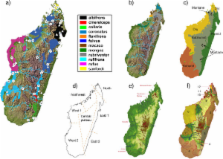 Due to its remarkable species diversity and micro-endemism, Madagascar has recently been suggested to serve as a biogeographic model region. However, hypothesis-based tests of various diversification mechanisms that have been proposed for the evolution of the island’s micro-endemic lineages are still limited. Here, we test the fit of several diversification hypotheses with new data on the broadly distributed genus Eulemur using coalescent-based phylogeographic analyses.

Time-calibrated species tree analyses and population genetic clustering resolved the previously polytomic species relationships among eulemurs. The most recent common ancestor of eulemurs was estimated to have lived about 4.45 million years ago (mya). Divergence date estimates furthermore suggested a very recent diversification among the members of the “brown lemur complex”, i.e. former subspecies of E. fulvus, during the Pleistocene (0.33-1.43 mya). Phylogeographic model comparisons of past migration rates showed significant levels of gene flow between lineages of neighboring river catchments as well as between eastern and western populations of the redfronted lemur ( E. rufifrons).

Together, our results are concordant with the centers of endemism hypothesis (Wilmé et al. 2006, Science 312:1063–1065), highlight the importance of river catchments for the evolution of Madagascar’s micro-endemic biota, and they underline the usefulness of testing diversification mechanisms using coalescent-based phylogeographic methods.

Wayne P. Maddison,  L Lacey Knowles (2006)
It is now well known that incomplete lineage sorting can cause serious difficulties for phylogenetic inference, but little attention has been paid to methods that attempt to overcome these difficulties by explicitly considering the processes that produce them. Here we explore approaches to phylogenetic inference designed to consider retention and sorting of ancestral polymorphism. We examine how the reconstructability of a species (or population) phylogeny is affected by (a) the number of loci used to estimate the phylogeny and (b) the number of individuals sampled per species. Even in difficult cases with considerable incomplete lineage sorting (times between divergences less than 1 N(e) generations), we found the reconstructed species trees matched the "true" species trees in at least three out of five partitions, as long as a reasonable number of individuals per species were sampled. We also studied the tradeoff between sampling more loci versus more individuals. Although increasing the number of loci gives more accurate trees for a given sampling effort with deeper species trees (e.g., total depth of 10 N(e) generations), sampling more individuals often gives better results than sampling more loci with shallower species trees (e.g., depth = 1 N(e)). Taken together, these results demonstrate that gene sequences retain enough signal to achieve an accurate estimate of phylogeny despite widespread incomplete lineage sorting. Continued improvement in our methods to reconstruct phylogeny near the species level will require a shift to a compound model that considers not only nucleotide or character state substitutions, but also the population genetics processes of lineage sorting. [Coalescence; divergence; population; speciation.].

Jean-Marie Cornuet,  Filipe Santos,  Mark Beaumont … (2008)
Summary: Genetic data obtained on population samples convey information about their evolutionary history. Inference methods can extract part of this information but they require sophisticated statistical techniques that have been made available to the biologist community (through computer programs) only for simple and standard situations typically involving a small number of samples. We propose here a computer program (DIY ABC) for inference based on approximate Bayesian computation (ABC), in which scenarios can be customized by the user to fit many complex situations involving any number of populations and samples. Such scenarios involve any combination of population divergences, admixtures and population size changes. DIY ABC can be used to compare competing scenarios, estimate parameters for one or more scenarios and compute bias and precision measures for a given scenario and known values of parameters (the current version applies to unlinked microsatellite data). This article describes key methods used in the program and provides its main features. The analysis of one simulated and one real dataset, both with complex evolutionary scenarios, illustrates the main possibilities of DIY ABC. Availability: The software DIY ABC is freely available at http://www.montpellier.inra.fr/CBGP/diyabc. Contact: j.cornuet@imperial.ac.uk Supplementary information: Supplementary data are also available at http://www.montpellier.inra.fr/CBGP/diyabc