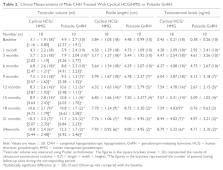 The objective of this study was to compare the effect of pulsatile gonadorelin pump (PGP) and cyclical gonadotropin (human chorionic gonadotropin [HCG]/human menopausal gonadotropin [HMG]) therapy (CGT) on spermatogenesis in congenital hypogonadotropic hypogonadism (CHH) men. Twenty-eight azoospermic CHH males were included in this nonrandomized study. Ten received PGP and 18 received CGT. The primary endpoint was the earliest time spermatogenesis occurred during 24 months of treatment. Spermatogenesis time was significant earlier in the PGP group than the CGT group (median of 6 and 14 months, respectively, χ 2 = 6.711, p = .01). Spermatogenesis occurred in 90% of the PGP group and 83.3% of the CGT group and showed statistically insignificant difference in the superiority analysis and the no-inferior test. Contributing factors significant for spermatogenesis were previous HCG/or testosterone treatment and the peak serum luteinizing hormone level of triptorelin stimulation test at baseline. Although testis volume and penile length increased significantly from baseline, the differences between the two therapies were not significant. There was a tendency for high serum testosterone level, associated with more facial acne and breast tenderness in the CGT group. Skin allergic erythema scleroma was a common side effect of the PGP. In summary, PGP resulted in earlier spermatogenesis and more desirable testosterone levels than CGT.

Trevor G Cooper,  Elizabeth Noonan,  Sigrid von Eckardstein … (2010)
Semen quality is taken as a surrogate measure of male fecundity in clinical andrology, male fertility, reproductive toxicology, epidemiology and pregnancy risk assessments. Reference intervals for values of semen parameters from a fertile population could provide data from which prognosis of fertility or diagnosis of infertility can be extrapolated. Semen samples from over 4500 men in 14 countries on four continents were obtained from retrospective and prospective analyses on fertile men, men of unknown fertility status and men selected as normozoospermic. Men whose partners had a time-to-pregnancy (TTP) of < or =12 months were chosen as individuals to provide reference distributions for semen parameters. Distributions were also generated for a population assumed to represent the general population. The following one-sided lower reference limits, the fifth centiles (with 95th percent confidence intervals), were generated from men whose partners had TTP < or = 12 months: semen volume, 1.5 ml (1.4-1.7); total sperm number, 39 million per ejaculate (33-46); sperm concentration, 15 million per ml (12-16); vitality, 58% live (55-63); progressive motility, 32% (31-34); total (progressive + non-progressive) motility, 40% (38-42); morphologically normal forms, 4.0% (3.0-4.0). Semen quality of the reference population was superior to that of the men from the general population and normozoospermic men. The data represent sound reference distributions of semen characteristics of fertile men in a number of countries. They provide an appropriate tool in conjunction with clinical data to evaluate a patient's semen quality and prospects for fertility.

Ulrich Boehm,  Pierre Bouloux,  Mehul Dattani … (2015)
Congenital hypogonadotropic hypogonadism (CHH) is a rare disorder caused by the deficient production, secretion or action of gonadotropin-releasing hormone (GnRH), which is the master hormone regulating the reproductive axis. CHH is clinically and genetically heterogeneous, with >25 different causal genes identified to date. Clinically, the disorder is characterized by an absence of puberty and infertility. The association of CHH with a defective sense of smell (anosmia or hyposmia), which is found in ∼50% of patients with CHH is termed Kallmann syndrome and results from incomplete embryonic migration of GnRH-synthesizing neurons. CHH can be challenging to diagnose, particularly when attempting to differentiate it from constitutional delay of puberty. A timely diagnosis and treatment to induce puberty can be beneficial for sexual, bone and metabolic health, and might help minimize some of the psychological effects of CHH. In most cases, fertility can be induced using specialized treatment regimens and several predictors of outcome have been identified. Patients typically require lifelong treatment, yet ∼10-20% of patients exhibit a spontaneous recovery of reproductive function. This Consensus Statement summarizes approaches for the diagnosis and treatment of CHH and discusses important unanswered questions in the field.

Induction of spermatogenesis and fertility during gonadotropin treatment of gonadotropin-deficient infertile men: predictors of fertility outcome.

Margaret Zacharin,  David Handelsman,  Andrew Baker … (2009)
The induction of spermatogenesis and fertility with gonadotropin therapy in gonadotropin-deficient men varies in rate and extent. Understanding the predictors of response would inform clinical practice but requires multivariate analyses in sufficiently large clinical cohorts that are suitably detailed and frequently assessed. A total of 75 men, with 72 desiring fertility, was treated at two academic andrology centers for a total of 116 courses of therapy from 1981-2008. Semen analysis and testicular examination were performed every 3 months. A total of 38 men became fathers, including five through assisted reproduction. The median time to achieve first sperm was 7.1 months [95% confidence interval (CI) 6.3-10.1]) and for conception was 28.2 months (95% CI 21.6-38.5). The median sperm concentration at conception for unassisted pregnancies was 8.0 m/ml (95% CI 0.2-59.5). Multivariate correlated time-to-event analyses show that larger testis volume, previous treatment with gonadotropins, and no previous androgen use each independently predicts faster induction of spermatogenesis and unassisted pregnancy. Larger testis volume is a useful prognostic indicator of response. The association of slower responses after prior androgen therapy suggests that faster pregnancy rates might be achieved by substituting gonadotropin for androgen therapy for pubertal induction, although a prospective randomized trial will be required to prove this.