The Vaginal Microbiota: What Have We Learned after a Decade of Molecular Characterization? 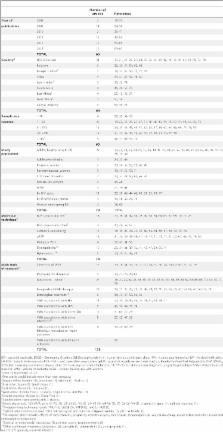 We conducted a systematic review of the Medline database (U.S. National Library of Medicine, National Institutes of Health, Bethesda, MD, U.S.A) to determine if consistent molecular vaginal microbiota (VMB) composition patterns can be discerned after a decade of molecular testing, and to evaluate demographic, behavioral and clinical determinants of VMB compositions. Studies were eligible when published between 1 January 2008 and 15 November 2013, and if at least one molecular technique (sequencing, PCR, DNA fingerprinting, or DNA hybridization) was used to characterize the VMB. Sixty three eligible studies were identified. These studies have now conclusively shown that lactobacilli-dominated VMB are associated with a healthy vaginal micro-environment and that bacterial vaginosis (BV) is best described as a polybacterial dysbiosis. The extent of dysbiosis correlates well with Nugent score and vaginal pH but not with the other Amsel criteria. Lactobacillus crispatus is more beneficial than L. iners. Longitudinal studies have shown that a L. crispatus-dominated VMB is more likely to shift to a L. iners-dominated or mixed lactobacilli VMB than to full dysbiosis. Data on VMB determinants are scarce and inconsistent, but dysbiosis is consistently associated with HIV, human papillomavirus (HPV), and Trichomonas vaginalis infection. In contrast, vaginal colonization with Candida spp. is more common in women with a lactobacilli-dominated VMB than in women with dysbiosis. Cervicovaginal mucosal immune responses to molecular VMB compositions have not yet been properly characterized. Molecular techniques have now become more affordable, and we make a case for incorporating them into larger epidemiological studies to address knowledge gaps in etiology and pathogenesis of dysbiosis, associations of different dysbiotic states with clinical outcomes, and to evaluate interventions aimed at restoring and maintaining a lactobacilli-dominated VMB.

Kjersti Aagaard,  Kevin Riehle,  Jun Ma … (2012)
While current major national research efforts (i.e., the NIH Human Microbiome Project) will enable comprehensive metagenomic characterization of the adult human microbiota, how and when these diverse microbial communities take up residence in the host and during reproductive life are unexplored at a population level. Because microbial abundance and diversity might differ in pregnancy, we sought to generate comparative metagenomic signatures across gestational age strata. DNA was isolated from the vagina (introitus, posterior fornix, midvagina) and the V5V3 region of bacterial 16S rRNA genes were sequenced (454FLX Titanium platform). Sixty-eight samples from 24 healthy gravidae (18 to 40 confirmed weeks) were compared with 301 non-pregnant controls (60 subjects). Generated sequence data were quality filtered, taxonomically binned, normalized, and organized by phylogeny and into operational taxonomic units (OTU); principal coordinates analysis (PCoA) of the resultant beta diversity measures were used for visualization and analysis in association with sample clinical metadata. Altogether, 1.4 gigabytes of data containing >2.5 million reads (averaging 6,837 sequences/sample of 493 nt in length) were generated for computational analyses. Although gravidae were not excluded by virtue of a posterior fornix pH >4.5 at the time of screening, unique vaginal microbiome signature encompassing several specific OTUs and higher-level clades was nevertheless observed and confirmed using a combination of phylogenetic, non-phylogenetic, supervised, and unsupervised approaches. Both overall diversity and richness were reduced in pregnancy, with dominance of Lactobacillus species (L. iners crispatus, jensenii and johnsonii, and the orders Lactobacillales (and Lactobacillaceae family), Clostridiales, Bacteroidales, and Actinomycetales. This intergroup comparison using rigorous standardized sampling protocols and analytical methodologies provides robust initial evidence that the vaginal microbial 16S rRNA gene catalogue uniquely differs in pregnancy, with variance of taxa across vaginal subsite and gestational age.

Sujatha Srinivasan,  Noah Hoffman,  Martin T. Morgan … (2012)
Background Bacterial vaginosis (BV) is a common condition that is associated with numerous adverse health outcomes and is characterized by poorly understood changes in the vaginal microbiota. We sought to describe the composition and diversity of the vaginal bacterial biota in women with BV using deep sequencing of the 16S rRNA gene coupled with species-level taxonomic identification. We investigated the associations between the presence of individual bacterial species and clinical diagnostic characteristics of BV. Methodology/Principal Findings Broad-range 16S rRNA gene PCR and pyrosequencing were performed on vaginal swabs from 220 women with and without BV. BV was assessed by Amsel’s clinical criteria and confirmed by Gram stain. Taxonomic classification was performed using phylogenetic placement tools that assigned 99% of query sequence reads to the species level. Women with BV had heterogeneous vaginal bacterial communities that were usually not dominated by a single taxon. In the absence of BV, vaginal bacterial communities were dominated by either Lactobacillus crispatus or Lactobacillus iners. Leptotrichia amnionii and Eggerthella sp. were the only two BV-associated bacteria (BVABs) significantly associated with each of the four Amsel’s criteria. Co-occurrence analysis revealed the presence of several sub-groups of BVABs suggesting metabolic co-dependencies. Greater abundance of several BVABs was observed in Black women without BV. Conclusions/Significance The human vaginal bacterial biota is heterogeneous and marked by greater species richness and diversity in women with BV; no species is universally present. Different bacterial species have different associations with the four clinical criteria, which may account for discrepancies often observed between Amsel and Nugent (Gram stain) diagnostic criteria. Several BVABs exhibited race-dependent prevalence when analyzed in separate groups by BV status which may contribute to increased incidence of BV in Black women. Tools developed in this project can be used to study microbial ecology in diverse settings at high resolution.

This work was part of projects funded by the Aids Fonds Netherlands (project number 201102) and the European Commission (CHAARM consortium). The findings and conclusions in this paper are those of the authors and do not necessarily represent the views of the funders. The funders had no role in study design, data collection and analysis, decision to publish, or preparation of the manuscript.

Data Availability The authors confirm that all data underlying the findings are fully available without restriction. This article is a review of the published literature and does not report on any original data.
Data availability:
ScienceOpen disciplines: Uncategorized