An Unprecedented Aggregation of Whale Sharks, Rhincodon typus, in Mexican Coastal Waters of the Caribbean Sea 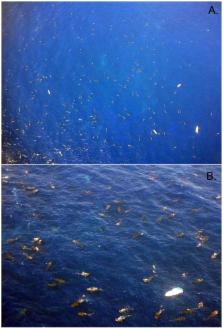 Whale sharks, Rhincodon typus, are often perceived as solitary behemoths that live and feed in the open ocean. To the contrary, evidence is accumulating that they are gregarious and form seasonal aggregations in some coastal waters. One such aggregation occurs annually north of Cabo Catoche, off Isla Holbox on the Yucatán Peninsula of Mexico. Here we report a second, much denser aggregation of whale sharks (dubbed “the Afuera”) that occurs east of the tip of the Yucatán Peninsula in the Caribbean Sea. The 2009 Afuera event comprised the largest aggregation of whale sharks ever reported, with up to 420 whale sharks observed in a single aerial survey, all gathered in an elliptical patch of ocean approximately 18 km 2. Plankton studies indicated that the sharks were feeding on dense homogenous patches of fish eggs, which DNA barcoding analysis identified as belonging to little tunny, Euthynnus alletteratus. This contrasts with the annual Cabo Catoche aggregation nearby, where prey consists mostly of copepods and sergestid shrimp. Increased sightings at the Afuera coincide with decreased sightings at Cabo Catoche, and both groups have the same sex ratio, implying that the same animals are likely involved in both aggregations; tagging data support this idea. With two whale shark aggregation areas, high coastal productivity and a previously-unknown scombrid spawning ground, the northeastern Yucatán marine region is a critical habitat that deserves more concerted conservation efforts.

A Castro,  B Stewart,  S Wilson … (2007)
Large pelagic vertebrates pose special conservation challenges because their movements generally exceed the boundaries of any single jurisdiction. To assess the population structure of whale sharks (Rhincodon typus), we sequenced complete mitochondrial DNA control regions from individuals collected across a global distribution. We observed 51 single site polymorphisms and 8 regions with indels comprising 44 haplotypes in 70 individuals, with high haplotype (h = 0.974 +/- 0.008) and nucleotide diversity (pi = 0.011 +/- 0.006). The control region has the largest length variation yet reported for an elasmobranch (1143-1332 bp). Phylogenetic analyses reveal no geographical clustering of lineages and the most common haplotype was distributed globally. The absence of population structure across the Indian and Pacific basins indicates that oceanic expanses and land barriers in Southeast Asia are not impediments to whale shark dispersal. We did, however, find significant haplotype frequency differences (AMOVA, Phi(ST) = 0.107, P < 0.001) principally between the Atlantic and Indo-Pacific populations. In contrast to other recent surveys of globally distributed sharks, we find much less population subdivision and no evidence for cryptic evolutionary partitions. Discovery of the mating and pupping areas of whale sharks is key to further population genetic studies. The global pattern of shared haplotypes in whale sharks provides a compelling argument for development of broad international approaches for management and conservation of Earth's largest fish.

Publisher ID: PONE-D-10-04593
DOI: 10.1371/journal.pone.0018994
PMC ID: 3084747
PubMed ID: 21559508
Copyright statement: de la Parra Venegas et al. This is an open-access article distributed under the terms of the Creative Commons Attribution License, which permits unrestricted use, distribution, and reproduction in any medium, provided the original author and source are credited.