Interoception in anxiety and depression 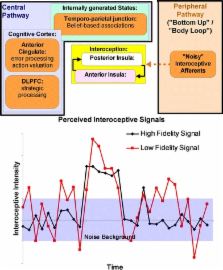 Does rejection hurt? An FMRI study of social exclusion.

Naomi Eisenberger,  Tami Lieberman,  Joseph D. Williams (2003)
A neuroimaging study examined the neural correlates of social exclusion and tested the hypothesis that the brain bases of social pain are similar to those of physical pain. Participants were scanned while playing a virtual ball-tossing game in which they were ultimately excluded. Paralleling results from physical pain studies, the anterior cingulate cortex (ACC) was more active during exclusion than during inclusion and correlated positively with self-reported distress. Right ventral prefrontal cortex (RVPFC) was active during exclusion and correlated negatively with self-reported distress. ACC changes mediated the RVPFC-distress correlation, suggesting that RVPFC regulates the distress of social exclusion by disrupting ACC activity.

Searching for a baseline: functional imaging and the resting human brain.

Debra A Gusnard,  Marcus E. Raichle (2001)
Functional brain imaging in humans has revealed task-specific increases in brain activity that are associated with various mental activities. In the same studies, mysterious, task-independent decreases have also frequently been encountered, especially when the tasks of interest have been compared with a passive state, such as simple fixation or eyes closed. These decreases have raised the possibility that there might be a baseline or resting state of brain function involving a specific set of mental operations. We explore this possibility, including the manner in which we might define a baseline and the implications of such a baseline for our understanding of brain function.

Lifetime and 12-month prevalence of DSM-III-R psychiatric disorders in the United States. Results from the National Comorbidity Survey.

Susan Eshleman,  Michael D. Hughes,  R Kessler … (1993)
This study presents estimates of lifetime and 12-month prevalence of 14 DSM-III-R psychiatric disorders from the National Comorbidity Survey, the first survey to administer a structured psychiatric interview to a national probability sample in the United States. The DSM-III-R psychiatric disorders among persons aged 15 to 54 years in the noninstitutionalized civilian population of the United States were assessed with data collected by lay interviewers using a revised version of the Composite International Diagnostic Interview. Nearly 50% of respondents reported at least one lifetime disorder, and close to 30% reported at least one 12-month disorder. The most common disorders were major depressive episode, alcohol dependence, social phobia, and simple phobia. More than half of all lifetime disorders occurred in the 14% of the population who had a history of three or more comorbid disorders. These highly comorbid people also included the vast majority of people with severe disorders. Less than 40% of those with a lifetime disorder had ever received professional treatment, and less than 20% of those with a recent disorder had been in treatment during the past 12 months. Consistent with previous risk factor research, it was found that women had elevated rates of affective disorders and anxiety disorders, that men had elevated rates of substance use disorders and antisocial personality disorder, and that most disorders declined with age and with higher socioeconomic status. The prevalence of psychiatric disorders is greater than previously thought to be the case. Furthermore, this morbidity is more highly concentrated than previously recognized in roughly one sixth of the population who have a history of three or more comorbid disorders. This suggests that the causes and consequences of high comorbidity should be the focus of research attention. The majority of people with psychiatric disorders fail to obtain professional treatment. Even among people with a lifetime history of three or more comorbid disorders, the proportion who ever obtain specialty sector mental health treatment is less than 50%. These results argue for the importance of more outreach and more research on barriers to professional help-seeking.