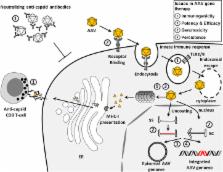 In recent years, the number of clinical trials in which adeno-associated virus (AAV) vectors have been used for in vivo gene transfer has steadily increased. The excellent safety profile, together with the high efficiency of transduction of a broad range of target tissues, has established AAV vectors as the platform of choice for in vivo gene therapy. Successful application of the AAV technology has also been achieved in the clinic for a variety of conditions, including coagulation disorders, inherited blindness, and neurodegenerative diseases, among others. Clinical translation of novel and effective “therapeutic products” is, however, a long process that involves several cycles of iterations from bench to bedside that are required to address issues encountered during drug development. For the AAV vector gene transfer technology, several hurdles have emerged in both preclinical studies and clinical trials; addressing these issues will allow in the future to expand the scope of AAV gene transfer as a therapeutic modality for a variety of human diseases. In this review, we will give an overview on the biology of AAV vector, discuss the design of AAV-based gene therapy strategies for in vivo applications, and present key achievements and emerging issues in the field. We will use the liver as a model target tissue for gene transfer based on the large amount of data available from preclinical and clinical studies.

Mauricio R Alvira,  Julie Johnston,  Guang Gao … (2002)
Tissues from rhesus monkeys were screened by PCR for the presence of sequences homologous to known adeno-associated virus (AAV) serotypes 1-6. DNA spanning entire rep-cap ORFs from two novel AAVs, called AAV7 and AAV8, were isolated. Sequence comparisons among these and previously described AAVs revealed the greatest divergence in capsid proteins. AAV7 and AAV8 were not neutralized by heterologous antisera raised to the other serotypes. Neutralizing antibodies to AAV7 and AAV8 were rare in human serum and, when present, were low in activity. Vectors formed with capsids from AAV7 and AAV8 were generated by using rep and inverted terminal repeats (ITRs) from AAV2 and were compared with similarly constructed vectors made from capsids of AAV1, AAV2, and AAV5. Murine models of skeletal muscle and liver-directed gene transfer were used to evaluate relative vector performance. AAV7 vectors demonstrated efficiencies of transgene expression in skeletal muscle equivalent to that observed with AAV1, the most efficient known serotype for this application. In liver, transgene expression was 10- to 100-fold higher with AAV8 than observed with other serotypes. This improved efficiency correlated with increased persistence of vector DNA and higher number of transduced hepatocytes. The efficiency of AAV8 vector for liver-directed gene transfer of factor IX was not impacted by preimmunization with the other AAV serotypes. Vectors based on these novel, nonhuman primate AAVs should be considered for human gene therapy because of low reactivity to antibodies directed to human AAVs and because gene transfer efficiency in muscle was similar to that obtained with the best known serotype, whereas, in liver, gene transfer was substantially higher than previously described.

Baozheng Li,  Mavis Agbandje-McKenna,  W. Herzog … (2008)
Recombinant adeno-associated virus 2 (AAV2) vectors are in use in several Phase I/II clinical trials, but relatively large vector doses are needed to achieve therapeutic benefits. Large vector doses also trigger an immune response as a significant fraction of the vectors fails to traffic efficiently to the nucleus and is targeted for degradation by the host cell proteasome machinery. We have reported that epidermal growth factor receptor protein tyrosine kinase (EGFR-PTK) signaling negatively affects transduction by AAV2 vectors by impairing nuclear transport of the vectors. We have also observed that EGFR-PTK can phosphorylate AAV2 capsids at tyrosine residues. Tyrosine-phosphorylated AAV2 vectors enter cells efficiently but fail to transduce effectively, in part because of ubiquitination of AAV capsids followed by proteasome-mediated degradation. We reasoned that mutations of the surface-exposed tyrosine residues might allow the vectors to evade phosphorylation and subsequent ubiquitination and, thus, prevent proteasome-mediated degradation. Here, we document that site-directed mutagenesis of surface-exposed tyrosine residues leads to production of vectors that transduce HeLa cells approximately 10-fold more efficiently in vitro and murine hepatocytes nearly 30-fold more efficiently in vivo at a log lower vector dose. Therapeutic levels of human Factor IX (F.IX) are also produced at an approximately 10-fold reduced vector dose. The increased transduction efficiency of tyrosine-mutant vectors is due to lack of capsid ubiquitination and improved intracellular trafficking to the nucleus. These studies have led to the development of AAV vectors that are capable of high-efficiency transduction at lower doses, which has important implications in their use in human gene therapy.

The AAV vector toolkit: poised at the clinical crossroads.