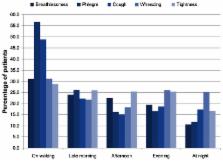 Chronic obstructive pulmonary disease (COPD) has traditionally been considered an inexorably progressive disease, associated with a constant increase of symptoms that occur as the forced expiratory volume in 1 second (FEV 1) worsens, only intermittently interrupted by exacerbations. However, this paradigm has been challenged in recent decades by the available evidence. Recent studies have pointed out that COPD-related symptoms are not consistently perceived by patients in the same way, showing not only seasonal variation, but also changes in symptom perception during a week or even within a single day. According to the available data, patients experience the biggest increase in respiratory symptoms during the first hours of the early morning, followed by the nighttime. This variation over time is of considerable importance, since it impacts on daily life activities and health-related quality of life, as measured by a recently developed ad hoc questionnaire. Additionally, recent clinical trials have suggested that the use of rapid-onset long-acting bronchodilators may have an impact on morning symptoms, despite their current use as maintenance treatment for a determined period. Although this hypothesis is to be validated in future long-term clinical trials comparing fast-onset versus slow-onset inhaled drugs in COPD, it may bring forward a new concept of long-term bronchodilator therapy. At the present time, the two available long-acting, fast-onset bronchodilators used in the treatment of COPD are formoterol and the recently marketed indacaterol. Newer drugs have also been shown to have a rapid onset of action in preclinical studies. Health care professionals caring for COPD patients should consider this variation in the perception of symptoms during their clinical interview as a potential new target in the long-term treatment plan.

Patient insight into the impact of chronic obstructive pulmonary disease in the morning: an internet survey.

Niklas Karlsson,  Benjamin Partridge,  I Small (2009)
To determine diurnal variability of symptoms in chronic obstructive pulmonary disease (COPD) and to assess the impact of COPD upon patients' morning activities and routines. Quantitative internet interviews with 803 COPD patients from Europe and the USA, including 289 patients with severe COPD. Severe COPD was defined according to regular use of COPD medication, third level of breathlessness or above using the modified Medical Research Council (MRC) dyspnoea scale (MRC dyspnoea score > or =3) and one or more COPD exacerbations in the preceding 12 months. Morning was the worst time of day for COPD symptoms, particularly in patients with severe COPD (reported by 46% of severe patients). In these patients, shortness of breath was the most frequently reported symptom, correlating strongly with problems experienced with morning activities. Morning activities most affected by COPD were walking up and down stairs, putting on shoes and socks, making the bed, dressing, showering or bathing and drying. The majority of patients were not taking their medication in time for it to exert its optimal effect. Many patients consider the impact of COPD on morning activities to be substantial. Physicians should question patients about morning activities to assess disease impact and to advise regarding the optimal time to use therapy. This was an internet-based questionnaire survey and possible bias in patient selection and self-reported diagnosis of COPD and its severity should be taken into account.

Efficacy and safety of NVA237 versus placebo and tiotropium in patients with COPD: the GLOW2 study