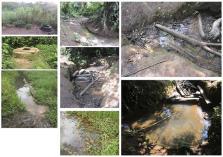 Little is known on the abundance of the pathogens Bacillus anthracis and Burkholderia pseudomallei in environmental samples in Cameroon. Therefore, 100 respective samples were assessed in a proof-of-principle assessment.

B. anthracis and B. pseudomallei were detected in none of the samples assessed.

The results indicate that at least a quantitatively overwhelming, ubiquitous occurrence of B. anthracis and B. pseudomallei in the environment in Cameroon is highly unlikely. However, the number and choice of the assessed samples limit the interpretability of the results.

W. Joost Wiersinga, Direk Limmathurotsakul, David Dance … (2018)
Burkholderia pseudomallei is a Gram-negative environmental bacterium and the aetiological agent of melioidosis, a life-threatening infection that is estimated to account for ~89,000 deaths per year worldwide. Diabetes mellitus is a major risk factor for melioidosis, and the global diabetes pandemic could increase the number of fatalities caused by melioidosis. Melioidosis is endemic across tropical areas, especially in southeast Asia and northern Australia. Disease manifestations can range from acute septicaemia to chronic infection, as the facultative intracellular lifestyle and virulence factors of B. pseudomallei promote survival and persistence of the pathogen within a broad range of cells, and the bacteria can manipulate the host’s immune responses and signalling pathways to escape surveillance. The majority of patients present with sepsis, but specific clinical presentations and their severity vary depending on the route of bacterial entry (skin penetration, inhalation or ingestion), host immune function and bacterial strain and load. Diagnosis is based on clinical and epidemiological features as well as bacterial culture. Treatment requires long-term intravenous and oral antibiotic courses. Delays in treatment due to difficulties in clinical recognition and laboratory diagnosis often lead to poor outcomes and mortality can exceed 40% in some regions. Research into B. pseudomallei is increasing, owing to the biothreat potential of this pathogen and increasing awareness of the disease and its burden; however, better diagnostic tests are needed to improve early confirmation of diagnosis, which would enable better therapeutic efficacy and survival.

Silke Klee, Muhsin Ozel, Bernd Appel … (2006)
We present the microbiological and molecular characterization of bacteria isolated from four chimpanzees and one gorilla thought to have died of an anthrax-like disease in Côte d'Ivoire and Cameroon. These isolates differed significantly from classic Bacillus anthracis by the following criteria: motility, resistance to the gamma phage, and, for isolates from Cameroon, resistance to penicillin G. A capsule was expressed not only after induction by CO(2) and bicarbonate but also under normal growth conditions. Subcultivation resulted in beta-hemolytic activity and gamma phage susceptibility in some subclones, suggesting differences in gene regulation compared to classic B. anthracis. The isolates from Côte d'Ivoire and Cameroon showed slight differences in their biochemical characteristics and MICs of different antibiotics but were identical in all molecular features and sequences analyzed. PCR and Southern blot analyses confirmed the presence of both the toxin and the capsule plasmid, with sizes corresponding to the B. anthracis virulence plasmids pXO1 and pXO2. Protective antigen was expressed and secreted into the culture supernatant. The isolates possessed variants of the Ba813 marker and the SG-749 fragment differing from that of classic B. anthracis strains. Multilocus sequence typing revealed a close relationship of our atypical isolates with both classic B. anthracis strains and two uncommonly virulent Bacillus cereus and Bacillus thuringiensis isolates. We propose that the newly discovered atypical B. anthracis strains share a common ancestor with classic B. anthracis or that they emerged recently by transfer of the B. anthracis plasmids to a strain of the B. cereus group.

Open Access. This is an open-access article distributed under the terms of the Creative Commons Attribution-NonCommercial 4.0 International License ( https://creativecommons.org/licenses/by-nc/4.0/), which permits unrestricted use, distribution, and reproduction in any medium for non-commercial purposes, provided the original author and source are credited, a link to the CC License is provided, and changes - if any – are indicated.