Associations between Handedness and Cerebral Lateralisation for Language: A Comparison of Three Measures in Children 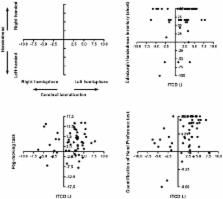 A classification of hand preference by association analysis.

E Ringelstein,  M. Deppe,  Christoph H Lohmann … (1999)
Our knowledge about the variability of cerebral language lateralization is derived from studies of patients with brain lesions and thus possible secondary reorganization of cerebral functions. In healthy right-handed subjects 'atypical', i.e. right hemisphere language dominance, has generally been assumed to be exceedingly rare. To test this assumption we measured language lateralization in 188 healthy subjects with moderate and strong right-handedness (59% females) by a new non-invasive, quantitative technique previously validated by direct comparison with the intracarotid amobarbital procedure. During a word generation task the averaged hemispheric perfusion differences within the territories of the middle cerebral arteries were determined. (i) The natural distribution of language lateralization was found to occur along a bimodal continuum. (ii) Lateralization was equivalent in men and women. (iii) Right hemisphere dominance was found in 7.5% of subjects. These findings indicate that atypical language dominance in healthy right-handed subjects of either sex is considerably more common than previously suspected.

The evolution and genetics of cerebral asymmetry.

Michael Corballis (2009)
Handedness and cerebral asymmetry are commonly assumed to be uniquely human, and even defining characteristics of our species. This is increasingly refuted by the evidence of behavioural asymmetries in non-human species. Although complex manual skill and language are indeed unique to our species and are represented asymmetrically in the brain, some non-human asymmetries appear to be precursors, and others are shared between humans and non-humans. In all behavioural and cerebral asymmetries so far investigated, a minority of individuals reverse or negate the dominant asymmetry, suggesting that such asymmetries are best understood in the context of the overriding bilateral symmetry of the brain and body, and a trade-off between the relative advantages and disadvantages of symmetry and asymmetry. Genetic models of handedness, for example, typically postulate a gene with two alleles, one disposing towards right-handedness and the other imposing no directional influence. There is as yet no convincing evidence as to the location of this putative gene, suggesting that several genes may be involved, or that the gene may be monomorphic with variations due to environmental or epigenetic influences. Nevertheless, it is suggested that, in behavioural, neurological and evolutionary terms, it may be more profitable to examine the degree rather than the direction of asymmetry.

Competing Interests: Co-author Andrew J. O. Whitehouse is a PLOS ONE Editorial Board member, and confirm this does not alter the authors' adherence to all the PLOS ONE policies on sharing data and materials.

This research was supported by a program grant from the Wellcome Trust (082498/Z/07/Z). Andrew J. O. Whitehouse is supported by a Career Development Fellowship from the National Health and Medical Research Council (no. 1004065). The funders had no role in study design, data collection and analysis, decision to publish, or preparation of the manuscript.