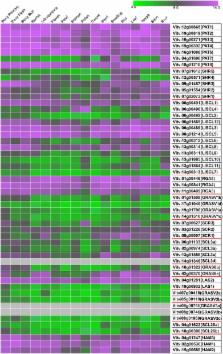 GRAS transcription factors are involved in many processes of plant growth and development (e.g., axillary shoot meristem formation, root radial patterning, nodule morphogenesis, arbuscular development) as well as in plant disease resistance and abiotic stress responses. However, little information is available concerning this gene family in grapevine ( Vitis vinifera L.), an economically important woody crop. We performed a model curation of GRAS genes identified in the latest genome annotation leading to the identification of 52 genes. Gene models were improved and three new genes were identified that could be grapevine- or woody-plant specific. Phylogenetic analysis showed that GRAS genes could be classified into 13 groups that mapped on the 19 V. vinifera chromosomes. Five new subfamilies, previously not characterized in other species, were identified. Multiple sequence alignment showed typical GRAS domain in the proteins and new motifs were also described. As observed in other species, both segmental and tandem duplications contributed significantly to the expansion and evolution of the GRAS gene family in grapevine. Expression patterns across a variety of tissues and upon abiotic and biotic conditions revealed possible divergent functions of GRAS genes in grapevine development and stress responses. By comparing the information available for tomato and grapevine GRAS genes, we identified candidate genes that might constitute conserved transcriptional regulators of both climacteric and non-climacteric fruit ripening. Altogether this study provides valuable information and robust candidate genes for future functional analysis aiming at improving the quality of fleshy fruits.

Alberto Casagrande (2007)
The analysis of the first plant genomes provided unexpected evidence for genome duplication events in species that had previously been considered as true diploids on the basis of their genetics. These polyploidization events may have had important consequences in plant evolution, in particular for species radiation and adaptation and for the modulation of functional capacities. Here we report a high-quality draft of the genome sequence of grapevine (Vitis vinifera) obtained from a highly homozygous genotype. The draft sequence of the grapevine genome is the fourth one produced so far for flowering plants, the second for a woody species and the first for a fruit crop (cultivated for both fruit and beverage). Grapevine was selected because of its important place in the cultural heritage of humanity beginning during the Neolithic period. Several large expansions of gene families with roles in aromatic features are observed. The grapevine genome has not undergone recent genome duplication, thus enabling the discovery of ancestral traits and features of the genetic organization of flowering plants. This analysis reveals the contribution of three ancestral genomes to the grapevine haploid content. This ancestral arrangement is common to many dicotyledonous plants but is absent from the genome of rice, which is a monocotyledon. Furthermore, we explain the chronology of previously described whole-genome duplication events in the evolution of flowering plants.

Giles E D Oldroyd (2013)
Plants associate with a wide range of microorganisms, with both detrimental and beneficial outcomes. Central to plant survival is the ability to recognize invading microorganisms and either limit their intrusion, in the case of pathogens, or promote the association, in the case of symbionts. To aid in this recognition process, elaborate communication and counter-communication systems have been established that determine the degree of ingress of the microorganism into the host plant. In this Review, I describe the common signalling processes used by plants during mutualistic interactions with microorganisms as diverse as arbuscular mycorrhizal fungi and rhizobial bacteria.

Riccardo Velasco,  Andrey Zharkikh,  Michela Troggio … (2008)
Background Worldwide, grapes and their derived products have a large market. The cultivated grape species Vitis vinifera has potential to become a model for fruit trees genetics. Like many plant species, it is highly heterozygous, which is an additional challenge to modern whole genome shotgun sequencing. In this paper a high quality draft genome sequence of a cultivated clone of V. vinifera Pinot Noir is presented. Principal Findings We estimate the genome size of V. vinifera to be 504.6 Mb. Genomic sequences corresponding to 477.1 Mb were assembled in 2,093 metacontigs and 435.1 Mb were anchored to the 19 linkage groups (LGs). The number of predicted genes is 29,585, of which 96.1% were assigned to LGs. This assembly of the grape genome provides candidate genes implicated in traits relevant to grapevine cultivation, such as those influencing wine quality, via secondary metabolites, and those connected with the extreme susceptibility of grape to pathogens. Single nucleotide polymorphism (SNP) distribution was consistent with a diffuse haplotype structure across the genome. Of around 2,000,000 SNPs, 1,751,176 were mapped to chromosomes and one or more of them were identified in 86.7% of anchored genes. The relative age of grape duplicated genes was estimated and this made possible to reveal a relatively recent Vitis-specific large scale duplication event concerning at least 10 chromosomes (duplication not reported before). Conclusions Sanger shotgun sequencing and highly efficient sequencing by synthesis (SBS), together with dedicated assembly programs, resolved a complex heterozygous genome. A consensus sequence of the genome and a set of mapped marker loci were generated. Homologous chromosomes of Pinot Noir differ by 11.2% of their DNA (hemizygous DNA plus chromosomal gaps). SNP markers are offered as a tool with the potential of introducing a new era in the molecular breeding of grape.

This article was submitted to Plant Physiology, a section of the journal Frontiers in Plant Science