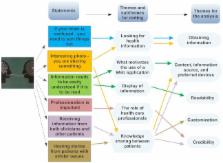 Information on self-management, including addressing people’s fears and concerns, are core aspects of managing patients with low back pain (LBP). Web apps with patient information may be used to extend patient-physician consultations and encourage self-management outside of the consultation room. It is, however, important to identify the end users’ needs and preferences in order to maximize acceptance.

The aim of this study was to identify preferences for the content, design, and functionality of a Web app with evidence-based information and advice for people with LBP in Denmark.

This is a phenomenological qualitative study. Adults who had consulted their general practitioner because of LBP within the past 14 days were included. Each participated in a semistructured interview, which was audiotaped and transcribed for text condensation. Interviews were conducted at the participant’s home by 2 interviewers. Participants also completed a questionnaire that requested information on age, gender, internet usage, interest in searching new knowledge, LBP-related function, and pain.

Fifteen 45-min interviews were conducted. Participants had a median age of 40 years (range 22-68 years) and reported a median disability of 7 points (range 0-18) using the 23-item Roland Morris Disability Questionnaire. Participants reported that Web-based information should be easy to find and read, easily overviewed, and not be overloaded with information. Subjects found existing Web-based information confusing, often difficult to comprehend, and not relevant for them, and they questioned the motives driving most hosting companies or organizations. The Patient Handbook, a Danish government-funded website that provides information to Danes about health, was mentioned as a trustworthy and preferred site when searching for information and advice regarding LBP.

This study identified important issues to consider when developing and supplementing existing general practice treatment with Web-based information and advice for patients with LBP. Development of a Web app should consider patient input, and developers should carefully address the following domains: readability, customization, design, credibility, and usability.

Chapter 3. European guidelines for the management of acute nonspecific low back pain in primary care.

P Nelemans,  C J Itz,  Peter van Lent … (2012)
Non-specific low back pain is a relatively common and recurrent condition for which at present there is no effective cure. In current guidelines, the prognosis of acute non-specific back pain is assumed to be favourable, but this assumption is mainly based on return to function. This systematic review investigates the clinical course of pain in patients with non-specific acute low back pain who seek treatment in primary care. DATABASES AND DATA TREATMENT: Included were prospective studies, with follow-up of at least 12 months, that studied the prognosis of patients with low back pain for less than 3 months of duration in primary care settings. Proportions of patients still reporting pain during follow-up were pooled using a random-effects model. Subgroup analyses were used to identify sources of variation between the results of individual studies. A total of 11 studies were eligible for evaluation. In the first 3 months, recovery is observed in 33% of patients, but 1 year after onset, 65% still report pain. Subgroup analysis reveals that the pooled proportion of patients still reporting pain after 1 year was 71% at 12 months for studies that considered total absence of pain as a criterion for recovery versus 57% for studies that used a less stringent definition. The pooled proportion for Australian studies was 41% versus 69% for European or US studies. The findings of this review indicate that the assumption that spontaneous recovery occurs in a large majority of patients is not justified. There should be more focus on intensive follow-up of patients who have not recovered within the first 3 months. © 2012 European Federation of International Association for the Study of Pain Chapters.

This is an open-access article distributed under the terms of the Creative Commons Attribution License ( https://creativecommons.org/licenses/by/4.0/), which permits unrestricted use, distribution, and reproduction in any medium, provided the original work, first published in JMIR Rehabilitation and Assistive Technology, is properly cited. The complete bibliographic information, a link to the original publication on http://rehab.jmir.org/, as well as this copyright and license information must be included.