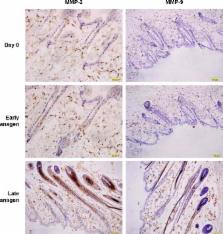 The mice were randomly allocated into four groups: saline, and 5, 10, and 15 nM SB-3CT. Immunohistochemical analysis was employed to examine MMP-2 and MMP-9 protein. Real-time polymerase chain reaction and enzyme-linked immunosorbent assay were performed to determine mRNA and protein levels of VEGF, IGF-1, TGF-β, and GAPDH. Growing hair follicles from anagen phase III–IV were scored based on hematoxylin and eosin staining. Hair regrowth was also evaluated.

Results showed that mRNA expressions of enzymes changed with a peak at late anagen and a trough at telogen after depilation. Immunostaining showed that the highest expression of MMP-2 was more than that of MMP-9, and the highest expression of enzymes changed during anagen. The localizations of MMP-2 changed from dermal papilla, keratinocyte strand, out of root sheath, and basal plate at early anagen, to hair bulb, inner root sheath, and outer root sheath at late anagen. The localization of MMP-9 changed from partial keratinocyte to dermal papilla at early anagen and to outer root sheath at late anagen. VEGF, IGF-1, and TGF-β have been shown to regulate hair growth. We found mRNA and protein expressions of VEGF and IGF-1 fluctuated with a peak at anagen and a decrease at catagen to telogen. In contrast, mRNA and protein expressions of TGF-β changed with highest and lowest levels at anagen and telogen, respectively. With selective inhibitor of collagenase IV, SB-3CT, mice showed significant suppressed hair growth and decreased expression of VEGF, IGF-1, and TGF-β. The MMPs agonist also significantly increased expression of VEGF, IGF-1, and TGF-β. Meanwhile, SB-3CT treatment significantly suppressed hair growth.

All these data suggest that the type IV collagenases, MMP-2 and MMP-9, play important roles in hair cycle, and this could be mediated by induced expression of VEGF, IGF-1, and TGF-β.

Control of hair growth and follicle size by VEGF-mediated angiogenesis.

Tara L. Brown,  M Detmar,  K Yano (2001)
The murine hair follicle undergoes pronounced cyclic expansion and regression, leading to rapidly changing demands for its vascular support. Our study aimed to quantify the cyclic changes of perifollicular vascularization and to characterize the biological role of VEGF for hair growth, angiogenesis, and follicle cycling. We found a significant increase in perifollicular vascularization during the growth phase (anagen) of the hair cycle, followed by regression of angiogenic blood vessels during the involution (catagen) and the resting (telogen) phase. Perifollicular angiogenesis was temporally and spatially correlated with upregulation of VEGF mRNA expression by follicular keratinocytes of the outer root sheath, but not by dermal papilla cells. Transgenic overexpression of VEGF in outer root sheath keratinocytes of hair follicles strongly induced perifollicular vascularization, resulting in accelerated hair regrowth after depilation and in increased size of hair follicles and hair shafts. Conversely, systemic treatment with a neutralizing anti-VEGF antibody led to hair growth retardation and reduced hair follicle size. No effects of VEGF treatment or VEGF blockade were observed in mouse vibrissa organ cultures, which lack a functional vascular system. These results identify VEGF as a major mediator of hair follicle growth and cycling and provide the first direct evidence that improved follicle vascularization promotes hair growth and increases hair follicle and hair size.

Expressions of MMP-2, MMP-9 and VEGF are closely linked to growth, invasion, metastasis and angiogenesis of gastric carcinoma.

Keratinocyte growth factor is required for hair development but not for wound healing.

L. Guo,  L Degenstein,  E. Fuchs (1996)
Keratinocyte growth factor (KGF), also known as fibroblast growth factor 7 (FGF7), is synthesized by skin fibroblasts. However, its mitogenic activity is on skin keratinocytes, where it is the most potent growth factor identified thus far. To explore KGF's function in vivo, we used embryonic stem cell technology to generate mice lacking KGF. Over time, their fur developed a matted appearance, very similar to that of the rough mouse, whose recessive mutation maps at or near the KGF locus on mouse chromosome 2. In contrast to the recently reported transforming growth factor-alpha (TGF-alpha) and FGF5 knockouts, which showed defects in the follicle outer-root sheath and the hair growth cycle, respectively, the hair defect in the KGF knockout seemed to be restricted to the cells giving rise to the hair shaft. Thus, we have uncovered a third, and at least partially nonoverlapping, growth factor pathway involved in orchestrating hair follicle growth and/or differentiation. Surprisingly, the absence of KGF resulted in no abnormalities in epidermal growth or wound healing. This was true even when we engineered double knockout mice, null for both KGF and TGF-alpha, two factors that are increased dramatically in the normal wound-healing process. Whereas we found no evidence of compensatory changes at the mRNA level of wounded knockout mice, these data imply that the regulation of epidermal growth is complex and involves a number of growth stimulatory factors that go beyond what are thought to be the major paracrine and autocrine growth factors. We suggest that the redundancy in epidermal growth and wound healing is likely to stem from the vitality of these functions to the organism, a feature that is not a consideration for the hair follicle.