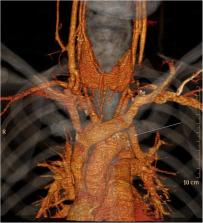 Persistent left superior vena cava (PLSVC) is a common vena cava malformation, and drains blood into the right atrium via the dilated coronary sinus in most cases. It is usually asymptomatic and detected incidentally during invasive procedures or imaging. Whether the hemodialysis catheters can be placed in PLSVC is still controversial now (Stylianou et al. Hemodial Int 11:42-45, 2007).

Here we report a rare case of catheterization through PLSVC in an end-stage renal disease (ESRD) male patient whose PLSVC connected with pulmonary vein with insufficient blood flow eventually. Among the other 28 cases included in the literature review, 16 cases were non-tunneled catheter and 12 cases were cuffed, tunneled catheter and most of them could provide adequate blood flow.

PLSVC is a rare malformation and mostly asymptotic, we believe that PLSVC drains blood into the right atrium with enough inner diameter and blood flow can serve as an alternative site for conventional dialysis access. However, the feasibility of hemodialysis catheterization through it and measures to avoid serious complications are still needed to be discussed.

Kurtis James,  Keith J. Edwards,  T Marshall (1976)
Abnormalities of cardiac rhythm have been reported by others in patients with a persistent left superior vena cava. We present the histological findings from postmortem examination of the cardiac conduction system of two such patients. The first patient was a schoolboy who died suddenly and unexpectedly. His sinus node was abnormally small, his A-V node contained numerous venous lacunae and was stretched out beneath the enlarged coronary sinus, both A-V node and His bundle were dispersed in the central fibrous body in a fetal pattern, and isolated fragments of A-V nodal tissue were connected to the myocardium at the crest of the interventricular septum. The second patient complained of palpitations many months prior to surgical correction of an interventricular septal defect; his postoperative course included multiple arrhythmias and he died suddenly on the 16th postoperative day. Although his sinus node was histologically normal, the nutrient artery contained a polypoid fibromuscular mass virtually occluding its lumen; his A-V node and His bundle were also dispersed in the central fibrous body in the fetal pattern, and the A-V node contained numerous venous lacunae as well as being histologically disorganized in its cytological pattern. These anatomical findings may indicate a basis for various forms of cardiac electrical instability, and deserve consideration in the future evaluation of any patient found to have a persistent left superior vene cava, but particularly if there is clinical evidence suggesting an arrhythmia or conduction disturbance.

Fetal persistent left superior vena cava in cases with and without chromosomal anomalies.

Liu Du,  Hong-Ning Xie,  Yun-Xiao Zhu … (2014)
The objectives of this study are to determine and compare the prevalence of persistent left superior vena cava (PLSVC) in chromosomally normal and abnormal fetuses and to evaluate the potential of PLSVC as a screening marker for chromosomal abnormalities.