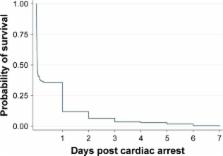 There are limited data available regarding long-term survival and its predictors in cases of in-hospital cardiac arrest (IHCA) in which patients receive cardiopulmonary resuscitation.

The objectives of this study were to determine the 1-year survival rates and predictors of survival after IHCA.

Data were retrospectively collected on all adult patients who were administered cardiopulmonary resuscitation from January 1, 2013 to December 31, 2014 in Srinagarind Hospital (Thailand). Clinical outcomes of interest and survival at discharge and 1 year after hospitalization were reviewed. Descriptive statistics and survival analysis were used to analyze the outcomes.

Of the 202 patients that were included, 48 (23.76%) were still alive at hospital discharge and 17 (about 8%) were still alive at 1 year post cardiac arrests. The 1-year survival rate for the cardiac arrest survivors post hospital discharge was 72.9%. Prearrest serum HCO 3<20 meq/L, asystole, urine <800 cc/d, postarrest coma, and absence of pupillary reflex were predictors of death.

Paul S Chan,  Brahmajee K. Nallamothu,  Harlan M. Krumholz … (2013)
Little is known about the long-term outcomes in elderly survivors of in-hospital cardiac arrest. We determined rates of long-term survival and readmission among survivors of in-hospital cardiac arrest and examined whether these outcomes differed according to demographic characteristics and neurologic status at discharge.

Alayne Markland,  Irvin Mayers,  P Brindley … (2002)
This study was undertaken to provide up-to-date survival data for Canadian adult in-patients following attempted resuscitation from cardiac or respiratory arrest. We hope that objective data might encourage more meaningful dialogue between physicians, patients and their families regarding resuscitation wishes. We reviewed all records of adult cardiopulmonary arrest that occurred between Jan. 1, 1997, and Jan. 31, 1999, at the 3 main teaching hospitals in Edmonton. We then abstracted data from the full inpatient medical records to describe patient characteristics, type of arrest and survival details. The family physicians of survivors were contacted to confirm the outcomes. We included only adults admitted to hospital but not to a critical care bed. There were 247 arrests during the study period; 143 (57.9%) were witnessed, and 104 (42.1%) were unwitnessed). Of the patients whose arrests were witnessed, 48.3% (95% confidence interval [CI] 39.8%-56.8%) were able to be resuscitated, 22.4% (95% CI 1 5.8%-30.1%) survived to hospital discharge, and 18.9% (95% CI 12.8%-26.3%) were able to return home. Survival was highest after primary respiratory arrest and lowest after pulseless electrical activity or asystole. Of the patients with unwitnessed arrests, 21.2% (95% CI 13.8%-30.3%) were able to be resuscitated, but only 1 patient (1.0% [95% CI 0.0%-5.2%]) survived to hospital discharge and was able to return home. This patient survived an unwitnessed respiratory arrest. No patient who had an unwitnessed cardiac arrest survived to discharge. Most of the respiratory arrests were witnessed (93.1%), and most of the pulseless electrical activity or asystole arrests were unwitnessed (54.6%). We did not find age or sex to be independent predictors of survival. However, the risk of not returning home was higher among patients whose arrest occurred between 2301 and 0700 than among those whose arrest was between 0701 and 1500 (adjusted OR 3.2, 95% CI 1.0-10.1). Survival was significantly decreased after pulseless ventricular tachycardia or ventricular fibrillation arrest (adjusted OR 4.2, 95% CI 1.4-12.5) and even more so after pulseless electrical activity or asystole arrest (adjusted OR 21.0, 95% CI 6.2-71.7) than after respiratory arrest. Overall, survival following cardiopulmonary resuscitation in hospital does not appear to have changed markedly in 40 years. The type of arrest is highly predictive of survival, whereas age and sex are not.

Pre-arrest predictors of failure to survive after in-hospital cardiopulmonary resuscitation: a meta-analysis.

Mark H Ebell,  Carlos Afonso (2011)
Our objective was to perform a systematic review of pre-arrest predictors of the outcome of in-hospital cardiopulmonary resuscitation (CPR) in adults. We searched PubMed for studies published since 1985 and bibliographies of previous meta-analyses. We included studies with predominantly adult patients, limited to in-hospital arrest, using an explicit definition of cardiopulmonary arrest and CPR and reporting survival to discharge by at least one pre-arrest variable. A total of 35 studies were included in the final analysis. Inclusion criteria, design elements and results were abstracted in parallel by both investigators. Discrepancies were resolved by consensus. The rate of survival to discharge was 17.5%; we found a trend towards increasing survival in more recent studies. Metastatic malignancy [odds ratio (OR) 3.9] or haematologic malignancy (OR 3.9), age over 70, 75 or 80 years (OR 1.5, 2.8 and 2.7, respectively), black race (OR 2.1), altered mental status (OR 2.2), dependency for activities of daily living (range OR 3.2-7.0 depending on specific activity), impaired renal function (OR 1.9), hypotension on admission (OR 1.8) and admission for pneumonia (OR 1.7), trauma (OR 1.7) or medical non-cardiac diagnosis (OR 2.2) were significantly associated with failure to survive to discharge; cardiovascular diagnoses and co-morbidities were associated with improved survival (range OR 0.23-0.53). Elevated CPR risk scores predicted failure to survive but have not been validated consistently in different populations. We identified several pre-arrest variables associated with failure to survive to discharge. This information should be shared with patients as part of a shared decision-making process regarding the use of do not resuscitate orders.