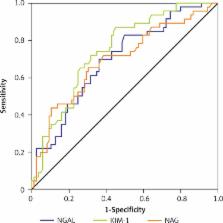 The aim of the study was to confirm whether higher levels of urinary neutrophil gelatinase-associated lipocalin (NGAL), kidney injury molecule-1 (KIM-1) and N-acetyl-β-D-glucosaminidase (NAG) are associated with mortality risk scores in severe septic patients with acute kidney injury (AKI).

A prospective observational study was performed in an adult critical care unit. A total of 135 patients were included. The levels of urinary NGAL, KIM-1 and NAG were compared between patients with acute physiology and chronic health evaluation (APACHE II) score > 25 (group A, n = 31) and APACHE II score ≤ 25 (group B, n = 104).

Norma Bobadilla,  Victoria Ramírez,  Joseph V. Bonventre … (2006)
Sensitive and specific biomarkers are needed to detect early kidney injury. The objective of the present work was to develop a sensitive quantitative urinary test to identify renal injury in the rodent to facilitate early assessment of pathophysiological influences and drug toxicity. Two mouse monoclonal antibodies were made against the purified ectodomain of kidney injury molecule-1 (Kim-1), and these were used to construct a sandwich Kim-1 ELISA. The assay range of this ELISA was 50 pg/ml to 5 ng/ml, with inter- and intra-assay variability of <10%. Urine samples were collected from rats treated with one of three doses of cisplatin (2.5, 5, or 7.5 mg/kg). At one day after each of the doses, there was an approximately three- to fivefold increase in the urine Kim-1 ectodomain, whereas other routinely used biomarkers measured in this study [plasma creatinine, blood urea nitrogen (BUN), urinary N-acetyl-beta-glucosaminidase (NAG), glycosuria, proteinuria] lacked the sensitivity to show any sign of renal damage at this time point. When rats were subjected to increasing periods (10, 20, 30, or 45 min) of bilateral ischemia, there was an increasing amount of urinary Kim-1 detected. After only 10 min of bilateral ischemia, Kim-1 levels on day 1 were 10-fold higher (5 ng/ml) than control levels, whereas plasma creatinine and BUN were not increased and there was no glycosuria, increased proteinuria, or increased urinary NAG levels. Thus urinary Kim-1 levels serve as a noninvasive, rapid, sensitive, reproducible, and potentially high-throughput method to detect early kidney injury in pathophysiological studies and in preclinical drug development studies for risk-benefit profiling of pharmaceutical agents.

Dania van der Meer,  V Bailly,  Sjoerd Burg … (2007)
KIM-1, a transmembrane tubular protein with unknown function, is undetectable in normal kidneys, but is markedly induced in experimental renal injury. The KIM-1 ectodomain is cleaved, detectable in urine, and reflects renal damage. KIM-1 expression in human renal biopsies and its correlation with urinary KIM-1 (uKIM-1) is unknown. In biopsies from various renal diseases (n = 102) and controls (n = 7), the fraction of KIM-1 positive tubules and different renal damage parameters were scored. Double labelling was performed for KIM-1 with macrophages (MØ), alpha-smooth muscle actin (alpha-SMA), proximal (aquaporin-1) and distal (E-cadherin) tubular markers and a dedifferentiation marker (vimentin). uKIM-1 at the time of biopsy (n = 53) was measured by ELISA. Renal KIM-1 was significantly increased in all diseases versus controls (p < 0.05), except minimal change. KIM-1 was primarily expressed at the luminal side of dedifferentiated proximal tubules, in areas with fibrosis (alpha-SMA) and inflammation (MØ). Independent of the disease, renal KIM-1 correlated positively with renal damage, negatively with renal function, but not with proteinuria. uKIM-1 was increased in renal patients versus controls (p < 0.001), including minimal change, and correlated positively with tissue KIM-1 and MØ, negatively with renal function, but not with proteinuria. In conclusion, KIM-1 is upregulated in renal disease and is associated with renal fibrosis and inflammation. uKIM-1 is also associated with inflammation and renal function, and reflects tissue KIM-1, indicating that it can be used as a non-invasive biomarker in renal disease. Copyright 2007 Pathological Society of Great Britain and Ireland. Published by John Wiley & Sons, Ltd.

Joseph V. Bonventre,  Michael Stevens,  S. Yang … (2004)
Nephrotoxicity is a common side effect of therapeutic interventions, environmental insults, and exposure to toxicants in the workplace. Although biomarkers for nephrotoxicity are available, they often lack sensitivity and are not specific as indicators of epithelial cell injury. Kidney injury molecule-1 (Kim-1) is a type 1 membrane protein with extracellular immunoglobulin and mucin domains. The mRNA and protein for Kim-1 are expressed at very low levels in normal rodent kidney, but expression increases dramatically after injury in proximal tubule epithelial cells in postischemic rodent kidney and in humans during ischemic acute renal failure. To evaluate the utility of Kim-1 as a biomarker for other types of renal injury, we analyzed tissue and urinary expression in response to three different types of nephrotoxicants in the rat: S-(1,1,2,2-tetrafluoroethyl)-l-cysteine (TFEC), folic acid, and cisplatin. Marked increases in Kim-1 expression were confirmed by immunoblotting in all three models. The protein was shown to be localized to the proximal tubule epithelial cell by immunofluorescence. Furthermore, Kim-1 protein was detected in urine of toxicant-treated rats. The temporal pattern of expression in response to TFEC is similar to the Kim-1 expression pattern in the postischemic kidney. In folic acid-treated kidneys, Kim-1 is clearly localized to the apical brush border of the well-differentiated proximal tubular epithelial cells. After folic acid treatment, expression of Kim-1 is present in the urine despite no significant increase in serum creatinine. Cisplatin treatment results in early detection of urinary Kim-1 protein and diffuse Kim-1 expression in S3 cells of the proximal tubule. Kim-1 can be detected in the tissue and urine on days 1 and 2 after cisplatin administration, occurring before an increase in serum creatinine. The upregulation of expression of Kim-1 and its presence in the urine in response to exposure to various types of nephrotoxicants suggest that this protein may serve as a general biomarker for tubular injury and repair processes.