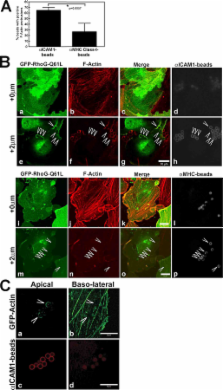 During trans-endothelial migration (TEM), leukocytes use adhesion receptors such as intercellular adhesion molecule-1 (ICAM1) to adhere to the endothelium. In response to this interaction, the endothelium throws up dynamic membrane protrusions, forming a cup that partially surrounds the adherent leukocyte. Little is known about the signaling pathways that regulate cup formation. In this study, we show that RhoG is activated downstream from ICAM1 engagement. This activation requires the intracellular domain of ICAM1. ICAM1 colocalizes with RhoG and binds to the RhoG-specific SH3-containing guanine-nucleotide exchange factor (SGEF). The SH3 domain of SGEF mediates this interaction. Depletion of endothelial RhoG by small interfering RNA does not affect leukocyte adhesion but decreases cup formation and inhibits leukocyte TEM. Silencing SGEF also results in a substantial reduction in RhoG activity, cup formation, and TEM. Together, these results identify a new signaling pathway involving RhoG and its exchange factor SGEF downstream from ICAM1 that is critical for leukocyte TEM.

John Sondek,  Channing J. Der,  K Rossman … (2005)
Guanine nucleotide-exchange factors (GEFs) are directly responsible for the activation of Rho-family GTPases in response to diverse extracellular stimuli, and ultimately regulate numerous cellular responses such as proliferation, differentiation and movement. With 69 distinct homologues, Dbl-related GEFs represent the largest family of direct activators of Rho GTPases in humans, and they activate Rho GTPases within particular spatio-temporal contexts. The failure to do so can have significant consequences and is reflected in the aberrant function of Dbl-family GEFs in some human diseases.

Christopher Carman,  Timothy Springer (2004)
The basic route and mechanisms for leukocyte migration across the endothelium remain poorly defined. We provide definitive evidence for transcellular (i.e., through individual endothelial cells) diapedesis in vitro and demonstrate that virtually all, both para- and transcellular, diapedesis occurs in the context of a novel “cuplike” transmigratory structure. This endothelial structure was comprised of highly intercellular adhesion molecule-1– and vascular cell adhesion molecule-1–enriched vertical microvilli-like projections that surrounded transmigrating leukocytes and drove redistribution of their integrins into linear tracks oriented parallel to the direction of diapedesis. Disruption of projections was highly correlated with inhibition of transmigration. These findings suggest a novel mechanism, the “transmigratory cup”, by which the endothelium provides directional guidance to leukocytes for extravasation.

Olga Barreiro,  María Yañez-Mó,  Juan Serrador … (2002)
Ezrin, radixin, and moesin (ERM) regulate cortical morphogenesis and cell adhesion by connecting membrane adhesion receptors to the actin-based cytoskeleton. We have studied the interaction of moesin and ezrin with the vascular cell adhesion molecule (VCAM)-1 during leukocyte adhesion and transendothelial migration (TEM). VCAM-1 interacted directly with moesin and ezrin in vitro, and all of these molecules colocalized at the apical surface of endothelium. Dynamic assessment of this interaction in living cells showed that both VCAM-1 and moesin were involved in lymphoblast adhesion and spreading on the endothelium, whereas only moesin participated in TEM, following the same distribution pattern as ICAM-1. During leukocyte adhesion in static or under flow conditions, VCAM-1, ICAM-1, and activated moesin and ezrin clustered in an endothelial actin-rich docking structure that anchored and partially embraced the leukocyte containing other cytoskeletal components such as α-actinin, vinculin, and VASP. Phosphoinositides and the Rho/p160 ROCK pathway, which participate in the activation of ERM proteins, were involved in the generation and maintenance of the anchoring structure. These results provide the first characterization of an endothelial docking structure that plays a key role in the firm adhesion of leukocytes to the endothelium during inflammation.