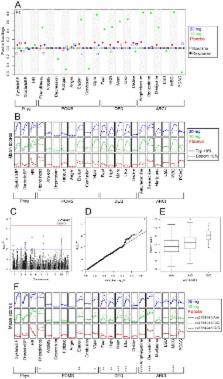 Both the subjective response to d-amphetamine and the risk for amphetamine addiction are known to be heritable traits. Because subjective responses to drugs may predict drug addiction, identifying alleles that influence acute response may also provide insight into the genetic risk factors for drug abuse. We performed a Genome Wide Association Study (GWAS) for the subjective responses to amphetamine in 381 non-drug abusing healthy volunteers. Responses to amphetamine were measured using a double-blind, placebo-controlled, within-subjects design. We used sparse factor analysis to reduce the dimensionality of the data to ten factors. We identified several putative associations; the strongest was between a positive subjective drug-response factor and a SNP (rs3784943) in the 8 th intron of cadherin 13 ( CDH13; P = 4.58×10 −8), a gene previously associated with a number of psychiatric traits including methamphetamine dependence. Additionally, we observed a putative association between a factor representing the degree of positive affect at baseline and a SNP (rs472402) in the 1 st intron of steroid-5-alpha-reductase-α-polypeptide-1 ( SRD5A1; P = 2.53×10 −7), a gene whose protein product catalyzes the rate-limiting step in synthesis of the neurosteroid allopregnanolone. This SNP belongs to an LD-block that has been previously associated with the expression of SRD5A1 and differences in SRD5A1 enzymatic activity. The purpose of this study was to begin to explore the genetic basis of subjective responses to stimulant drugs using a GWAS approach in a modestly sized sample. Our approach provides a case study for analysis of high-dimensional intermediate pharmacogenomic phenotypes, which may be more tractable than clinical diagnoses.

A map of human genome variation from population-scale sequencing.

Gonçalo R Abecasis,  David Altshuler,  Adam Auton … (2011)
The 1000 Genomes Project aims to provide a deep characterization of human genome sequence variation as a foundation for investigating the relationship between genotype and phenotype. Here we present results of the pilot phase of the project, designed to develop and compare different strategies for genome-wide sequencing with high-throughput platforms. We undertook three projects: low-coverage whole-genome sequencing of 179 individuals from four populations; high-coverage sequencing of two mother-father-child trios; and exon-targeted sequencing of 697 individuals from seven populations. We describe the location, allele frequency and local haplotype structure of approximately 15 million single nucleotide polymorphisms, 1 million short insertions and deletions, and 20,000 structural variants, most of which were previously undescribed. We show that, because we have catalogued the vast majority of common variation, over 95% of the currently accessible variants found in any individual are present in this data set. On average, each person is found to carry approximately 250 to 300 loss-of-function variants in annotated genes and 50 to 100 variants previously implicated in inherited disorders. We demonstrate how these results can be used to inform association and functional studies. From the two trios, we directly estimate the rate of de novo germline base substitution mutations to be approximately 10(-8) per base pair per generation. We explore the data with regard to signatures of natural selection, and identify a marked reduction of genetic variation in the neighbourhood of genes, due to selection at linked sites. These methods and public data will support the next phase of human genetic research.