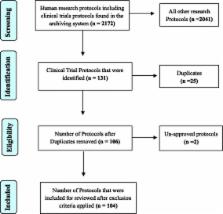 International guidelines recommend ethical and scientific quality standards for managing and reporting adverse events occurring during clinical trials to competent research ethics committees and regulatory authorities. The purpose of this study was to determine whether clinical trial protocols in Cameroon are developed in line with national requirements and international guidelines as far as detecting, reporting and investigating of adverse events is concerned.

It was a documentary review of all approved clinical trial protocols that were submitted at the Cameroon National Ethics Committee for evaluation from 1997 through 2012. Data were extracted using a preconceived and validated grid. Protocol review process targeted the title, abstract, objectives, methodology, resources, and the chapter on safety.

Improving the quality of reporting of randomized controlled trials. The CONSORT statement.

Agreement between questionnaire data and medical records. The evidence for accuracy of recall.

Nicholas R. Fuller,  W Castle,  Brett A J Palmer … (1993)
To compare safety of salmeterol and salbutamol in treating asthma. Double blind, randomised clinical trial in parallel groups over 16 weeks. General practices throughout the United Kingdom. 25,180 patients with asthma considered to require regular treatment with bronchodilators who were recruited by their general practitioner (n = 3516). Salmeterol (Serevent) (50 micrograms twice daily) or salbutamol (200 micrograms four times a day) randomised in the ratio of two patients taking salmeterol to one taking salbutamol. All other drugs including prophylaxis against asthma were continued throughout the study. All serious events and reasons for withdrawals (medical and non-medical) whether or not they were considered to be related to the drugs. Fewer medical withdrawals due to asthma occurred in patients taking salmeterol than in those taking salbutamol (2.91% v 3.79%; chi 2 = 13.6, p = 0.0002). Mortality and admissions to hospital were as expected. There was a small but non-significant excess mortality in the group taking salmeterol and a significant excess of asthma events including deaths in patients with severe asthma on entry. Use of more than two canisters of bronchodilator a month was particularly associated with the occurrence of an adverse asthma event. Treatment over 16 weeks with either salmeterol or salbutamol was not associated with an incidence of deaths related to asthma in excess of that predicted. Overall control of asthma was better in patients allocated to salmeterol. Serious adverse events occurred in patients most at risk on entry and were probably due to the disease rather than treatment.