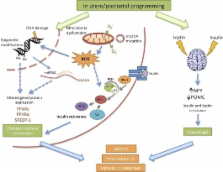 Metabolic disorders have seen an increased prevalence in recent years in developed as well as developing countries. While it is clear lifestyle choices and habits have contributed to this epidemic, mounting evidence suggests the nutritional milieu during critical stages of development in early life can “program” individuals to develop the metabolic syndrome later in life. Extensive epidemiological data presents an association between maternal obesity and nutrition during pregnancy and offspring obesity, and a number of animal models have been established in order to uncover the underlying mechanisms contributing to the programming of physiological systems. It is hard to distinguish the causal factors due to the complex nature of the maternal–fetal relationship; however, in order to develop adequate prevention strategies it is vital to identify which maternal factor(s) – be it the diet, diet-induced obesity or weight gain – and at which time during early development instigate the programmed phenotype. Curtailing the onset of obesity at this early stage in life presents a promising avenue through which to stem the growing epidemic of obesity.

D Barker,  C N Hales,  C H D Fall … (1993)
Two follow-up studies were carried out to determine whether lower birthweight is related to the occurrence of syndrome X-Type 2 (non-insulin-dependent) diabetes mellitus, hypertension and hyperlipidaemia. The first study included 407 men born in Hertfordshire, England between 1920 and 1930 whose weights at birth and at 1 year of age had been recorded by health visitors. The second study included 266 men and women born in Preston, UK, between 1935 and 1943 whose size at birth had been measured in detail. The prevalence of syndrome X fell progressively in both men and women, from those who had the lowest to those who had the highest birthweights. Of 64-year-old men whose birthweights were 2.95 kg (6.5 pounds) or less, 22% had syndrome X. Their risk of developing syndrome X was more than 10 times greater than that of men whose birthweights were more than 4.31 kg (9.5 pounds). The association between syndrome X and low birthweight was independent of duration of gestation and of possible confounding variables including cigarette smoking, alcohol consumption and social class currently or at birth. In addition to low birthweight, subjects with syndrome X had small head circumference and low ponderal index at birth, and low weight and below-average dental eruption at 1 year of age. It is concluded that Type 2 diabetes and hypertension have a common origin in sub-optimal development in utero, and that syndrome X should perhaps be re-named "the small-baby syndrome".

Fetal and infant growth and impaired glucose tolerance at age 64.