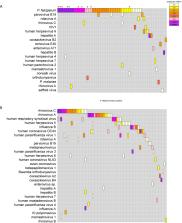 Febrile illness is a major burden in African children, and non-malarial causes of fever are uncertain. In this retrospective exploratory study, we used metagenomic next-generation sequencing (mNGS) to evaluate serum, nasopharyngeal, and stool specimens from 94 children (aged 2–54 months) with febrile illness admitted to Tororo District Hospital, Uganda. The most common microbes identified were Plasmodium falciparum (51.1% of samples) and parvovirus B19 (4.4%) from serum; human rhinoviruses A and C (40%), respiratory syncytial virus (10%), and human herpesvirus 5 (10%) from nasopharyngeal swabs; and rotavirus A (50% of those with diarrhea) from stool. We also report the near complete genome of a highly divergent orthobunyavirus, tentatively named Nyangole virus, identified from the serum of a child diagnosed with malaria and pneumonia, a Bwamba orthobunyavirus in the nasopharynx of a child with rash and sepsis, and the genomes of two novel human rhinovirus C species. In this retrospective exploratory study, mNGS identified multiple potential pathogens, including 3 new viral species, associated with fever in Ugandan children.

Commensal host-bacterial relationships in the gut.

Iain Gordon,  Scott L Hooper (2001)
One potential outcome of the adaptive coevolution of humans and bacteria is the development of commensal relationships, where neither partner is harmed, or symbiotic relationships, where unique metabolic traits or other benefits are provided. Our gastrointestinal tract is colonized by a vast community of symbionts and commensals that have important effects on immune function, nutrient processing, and a broad range of other host activities. The current genomic revolution offers an unprecedented opportunity to identify the molecular foundations of these relationships so that we can understand how they contribute to our normal physiology and how they can be exploited to develop new therapeutic strategies.

Proposals for the classification of human rhinovirus species A, B and C into genotypically assigned types

Chloe L. McIntyre,  Nick Knowles,  Peter Simmonds (2013)
Human rhinoviruses (HRVs) frequently cause mild upper respiratory tract infections and more severe disease manifestations such as bronchiolitis and asthma exacerbations. HRV is classified into three species within the genus Enterovirus of the family Picornaviridae. HRV species A and B contain 75 and 25 serotypes identified by cross-neutralization assays, although the use of such assays for routine HRV typing is hampered by the large number of serotypes, replacement of virus isolation by molecular methods in HRV diagnosis and the poor or absent replication of HRV species C in cell culture. To address these problems, we propose an alternative, genotypic classification of HRV-based genetic relatedness analogous to that used for enteroviruses. Nucleotide distances between 384 complete VP1 sequences of currently assigned HRV (sero)types identified divergence thresholds of 13, 12 and 13 % for species A, B and C, respectively, that divided inter- and intra-type comparisons. These were paralleled by 10, 9.5 and 10 % thresholds in the larger dataset of >3800 VP4 region sequences. Assignments based on VP1 sequences led to minor revisions of existing type designations (such as the reclassification of serotype pairs, e.g. A8/A95 and A29/A44, as single serotypes) and the designation of new HRV types A101–106, B101–103 and C34–C51. A protocol for assignment and numbering of new HRV types using VP1 sequences and the restriction of VP4 sequence comparisons to type identification and provisional type assignments is proposed. Genotypic assignment and identification of HRV types will be of considerable value in the future investigation of type-associated differences in disease outcomes, transmission and epidemiology.

Data Availability All raw data have been deposited under Bioproject ID: PRJNA483304. Assembled genomes can be accessed in GenBank: Accession numbers: MH685676-MH685701, MH685703-MH685719, MH684286-MH684293, MH684298-MH684334. All the raw data, intermediate data and IDseq reports can also be accessed at https://idseq.net [Project ID: Uganda]. All IDseq scripts and user instructions are available at https://github.com/chanzuckerberg/idseq-dag and the graphical user interface web application for sample upload is available at https://github.com/chanzuckerberg/idseq-web.
Data availability:
ScienceOpen disciplines: Uncategorized