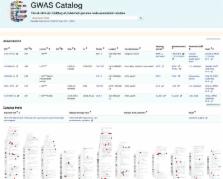 The NHGRI-EBI GWAS Catalog has provided data from published genome-wide association studies since 2008. In 2015, the database was redesigned and relocated to EMBL-EBI. The new infrastructure includes a new graphical user interface ( www.ebi.ac.uk/gwas/), ontology supported search functionality and an improved curation interface. These developments have improved the data release frequency by increasing automation of curation and providing scaling improvements. The range of available Catalog data has also been extended with structured ancestry and recruitment information added for all studies. The infrastructure improvements also support scaling for larger arrays, exome and sequencing studies, allowing the Catalog to adapt to the needs of evolving study design, genotyping technologies and user needs in the future.

A navigator for human genome epidemiology.

Europe PMC: a full-text literature database for the life sciences and platform for innovation

(2014)
This article describes recent developments of Europe PMC (http://europepmc.org), the leading database for life science literature. Formerly known as UKPMC, the service was rebranded in November 2012 as Europe PMC to reflect the scope of the funding agencies that support it. Several new developments have enriched Europe PMC considerably since then. Europe PMC now offers RESTful web services to access both articles and grants, powerful search tools such as citation-count sort order and data citation features, a service to add publications to your ORCID, a variety of export formats, and an External Links service that enables any related resource to be linked from Europe PMC content.

Lipika Pal,  John Moult (2015)
Recent genome-wide association studies (GWAS) have led to the reliable identification of single nucleotide polymorphisms (SNPs) at a number of loci associated with increased risk of specific common human diseases. Each such locus implicates multiple possible candidate SNPs for involvement in disease mechanism. A variety of mechanisms may link the presence of an SNP to altered in vivo gene product function and hence contribute to disease risk. Here, we report an analysis of the role of one of these mechanisms, missense SNPs (msSNPs) in proteins in seven complex trait diseases. Linkage disequilibrium information was used to identify possible candidate msSNPs associated with increased disease risk at each of 356 loci for the seven diseases. Two computational methods were used to estimate which of these SNPs has a significant impact on in vivo protein function. 69% of the loci have at least one candidate msSNP and 33% have at least one predicted high-impact msSNP. In some cases, these SNPs are in well-established disease-related proteins, such as MST1 (macrophage stimulating 1) for Crohn's disease. In others, they are in proteins identified by GWAS as likely candidates for disease relevance, but previously without known mechanism, such as ADAMTS13 (ADAM metallopeptidase with thrombospondin type 1 motif, 13) for coronary artery disease. In still other cases, the missense SNPs are in proteins not previously suggested as disease candidates, such as TUBB1 (tubulin, beta 1, class VI) for hypertension. Together, these data support a substantial role for this class of SNPs in susceptibility to common human disease.