A Dual Role Hypothesis of the Cortico-Basal-Ganglia Pathways: Opponency and Temporal Difference Through Dopamine and Adenosine 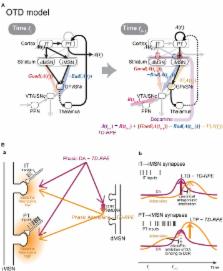 The hypothesis that the basal-ganglia direct and indirect pathways represent goodness (or benefit) and badness (or cost) of options, respectively, explains a wide range of phenomena. However, this hypothesis, named the Opponent Actor Learning (OpAL), still has limitations. Structurally, the OpAL model does not incorporate differentiation of the two types of cortical inputs to the basal-ganglia pathways received from intratelencephalic (IT) and pyramidal-tract (PT) neurons. Functionally, the OpAL model does not describe the temporal-difference (TD)-type reward-prediction-error (RPE), nor explains how RPE is calculated in the circuitry connecting to the DA neurons. In fact, there is a different hypothesis on the basal-ganglia pathways and DA, named the Cortico-Striatal-Temporal-Difference (CS-TD) model. The CS-TD model differentiates the IT and PT inputs, describes the TD-type RPE, and explains how TD-RPE is calculated. However, a critical difficulty in this model lies in its assumption that DA induces the same direction of plasticity in both direct and indirect pathways, which apparently contradicts the experimentally observed opposite effects of DA on these pathways. Here, we propose a new hypothesis that integrates the OpAL and CS-TD models. Specifically, we propose that the IT-basal-ganglia pathways represent goodness/badness of current options while the PT-indirect pathway represents the overall value of the previously chosen option, and both of these have influence on the DA neurons, through the basal-ganglia output, so that a variant of TD-RPE is calculated. A key assumption is that opposite directions of plasticity are induced upon phasic activation of DA neurons in the IT-indirect pathway and PT-indirect pathway because of different profiles of IT and PT inputs. Specifically, at PT→indirect-pathway-medium-spiny-neuron (iMSN) synapses, sustained glutamatergic inputs generate rich adenosine, which allosterically prevents DA-D2 receptor signaling and instead favors adenosine-A2A receptor signaling. Then, phasic DA-induced phasic adenosine, which reflects TD-RPE, causes long-term synaptic potentiation. In contrast, at IT→iMSN synapses where adenosine is scarce, phasic DA causes long-term synaptic depression via D2 receptor signaling. This new Opponency and Temporal-Difference (OTD) model provides unique predictions, part of which is potentially in line with recently reported activity patterns of neurons in the globus pallidus externus on the indirect pathway.

C Gerfen,  D. James Surmeier (2010)
The basal ganglia are a chain of subcortical nuclei that facilitate action selection. Two striatal projection systems--so-called direct and indirect pathways--form the functional backbone of the basal ganglia circuit. Twenty years ago, investigators proposed that the striatum's ability to use dopamine (DA) rise and fall to control action selection was due to the segregation of D(1) and D(2) DA receptors in direct- and indirect-pathway spiny projection neurons. Although this hypothesis sparked a debate, the evidence that has accumulated since then clearly supports this model. Recent advances in the means of marking neural circuits with optical or molecular reporters have revealed a clear-cut dichotomy between these two cell types at the molecular, anatomical, and physiological levels. The contrast provided by these studies has provided new insights into how the striatum responds to fluctuations in DA signaling and how diseases that alter this signaling change striatal function.

A framework for mesencephalic dopamine systems based on predictive Hebbian learning.

Terrence Sejnowski,  P. Dayan,  Nicholas P. Montague (1996)
We develop a theoretical framework that shows how mesencephalic dopamine systems could distribute to their targets a signal that represents information about future expectations. In particular, we show how activity in the cerebral cortex can make predictions about future receipt of reward and how fluctuations in the activity levels of neurons in diffuse dopamine systems above and below baseline levels would represent errors in these predictions that are delivered to cortical and subcortical targets. We present a model for how such errors could be constructed in a real brain that is consistent with physiological results for a subset of dopaminergic neurons located in the ventral tegmental area and surrounding dopaminergic neurons. The theory also makes testable predictions about human choice behavior on a simple decision-making task. Furthermore, we show that, through a simple influence on synaptic plasticity, fluctuations in dopamine release can act to change the predictions in an appropriate manner.