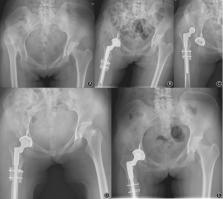 To investigate whether the risk of dislocation after total hip arthroplasty (THA) in patients with Crowe type IV developmental dysplasia of the hip (DDH) is high and to further identify the risk factors for postoperative dislocation in these patients.

Crowe type IV DDH patients were at a high risk of dislocation after THA, and using large femoral heads and improving abductor muscle strength may help decrease the rate of postoperative dislocation in such patients.

R Tarr,  Helen J Lewis,  C L Compere … (1978)
In a series of 300 total hip replacements, nine (3 per cent) dislocated. Precise measurements of the orientation of the acetabular cup were made and it was found that anterior dislocations were associated with increased acetabular-component anteversion. There was no significant correlation between cup-orientation angle and posterior dislocation. The dislocation rate for cup orientation with anteversion of 15 +/- 10 degrees and lateral opening of 40 +/- 10 degrees was 1.5 per cent, while outside this "safe" range the dislocation rate was 6.1 per cent. Other factors that were documented include time after surgery (with the greatest risk in the first thirty days) and surgical history (with a greater risk in hips that have had prior surgery).

The definition and measurement of acetabular orientation.

Total hip replacement in congenital dislocation and dysplasia of the hip.

Ganapathyraman Mani,  Amar Ranawat,  F Crowe (1978)
The results of thirty-one total hip replacements in twenty-four patients with either severe congenital dysplasia or dislocation, after an average follow-up of four years, were excellent in eleven, good in sixteen, fair in one, and poor in one. The operative technique included superolateral bone grafts to increase the acetabular coverage in six hips. Twenty-seven hips required smaller and straighter femoral components than normal. The incidence of major complications was 19 per cent.

Zi‐chuan Ding and Wei‐nan Zeng contributed equally to this work.