The Multidisciplinary Team (MDT) Approach and Quality of Care 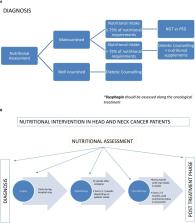 The core function of a multidisciplinary team (MDT) is to bring together a group of healthcare professionals from different fields in order to determine patients' treatment plan. Most of head and neck cancer (HNC) units are currently led by MDTs that at least include ENT and maxillofacial surgeons, radiation and medical oncologists. HNC often compromise relevant structures of the upper aerodigestive tract involving functions such as speech, swallowing and breathing, among others. The impairment of these functions can significantly impact patients' quality of life and psychosocial status, and highlights the crucial role of specialized nurses, dietitians, psycho-oncologists, social workers, and onco-geriatricians, among others. Hence, these professionals should be integrated in HNC MDTs. In addition, involving translational research teams should also be considered, as it will help reducing the existing gap between basic research and the daily clinical practice. The aim of this comprehensive review is to assess the role of the different supportive disciplines integrated in an MDT and how they help providing a better care to HNC patients during diagnosis, treatment and follow up.

The Vulnerable Elders Survey: a tool for identifying vulnerable older people in the community.

Use of comprehensive geriatric assessment in older cancer patients: recommendations from the task force on CGA of the International Society of Geriatric Oncology (SIOG).

Martine Extermann, Matti Aapro, Roberto Bernabei … (2005)
As more and more cancers occur in elderly people, oncologists are increasingly confronted with the necessity of integrating geriatric parameters in the treatment of their patients. The International Society of Geriatric Oncology (SIOG) created a task force to review the evidence on the use of a comprehensive geriatric assessment (CGA) in cancer patients. A systematic review of the evidence was conducted. Several biological and clinical correlates of aging have been identified. Their relative weight and clinical usefulness is still poorly defined. There is strong evidence that a CGA detects many problems missed by a regular assessment in general geriatric and in cancer patients. There is also strong evidence that a CGA improves function and reduces hospitalization in the elderly. There is heterogeneous evidence that it improves survival and that it is cost-effective. There is corroborative evidence from a few studies conducted in cancer patients. Screening tools exist and were successfully used in settings such as the emergency room, but globally were poorly tested. The article contains recommendations for the use of CGA in research and clinical care for older cancer patients. A CGA, with or without screening, and with follow-up, should be used in older cancer patients, in order to detect unaddressed problems, improve their functional status, and possibly their survival. The task force cannot recommend any specific tool or approach above others at this point and general geriatric experience should be used.

This article was submitted to Head and Neck Cancer, a section of the journal Frontiers in Oncology